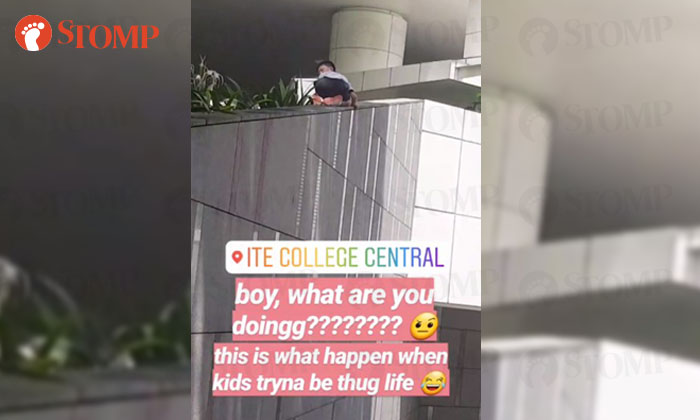 A toddler had climbed onto a ledge over three metres high at the entrance of ITE College Central in Ang Mo Kio last Friday (Nov 16).

Stomper Danny and his classmate witnessed the incident at about 1.08pm, when they were headed back home.

Danny said: "There were two other students standing near us, they were shocked and concerned and shouted at the boy to come down.

"My friend and I also joined in, asking the boy to come down. I think the boy was terrified."

He recorded two videos of the incident and sent them to Stomp.

In one of the two videos the Stomper sent, the boy kept on climbing upwards and turning to look down.

The caption in the video explained that the boy was climbing higher, instead of coming down.

It also warned other kids saying: "Kids please don't do such stupid things. You'll only end up hurting yourself."

In the video, a man can be heard shouting at the boy to come down.

In the background, someone says to the boy: "Dude, come down, you're gonna fall."

Someone shouts at the boy to come down again, and the boy shouts: "Wait!"

A man said in Malay: "I think he is scared."

In the other video sent, the boy is still on the ledge, but a security guard was aware of the situation and was approaching the scene.

The video is accompanied with a caption: "Boy what are you doing? This is what happens when kids try to be part of the thug life."

Another man can be heard in the background saying in Malay: "If he falls, he'll break his leg."

The Stomper said the boy was on the ledge for about 15 minutes.

"I was wondering where his parents were. How could his parents not notice their son endangering his life," Danny added.

Related Stories
Youths 'lepak' on roof of sheltered walkways in Telok Blangah and Yishun
Stomper worries about elderly woman's safety after seeing her sweeping roof of semi-D at Serangoon Ave 1
Girls, surely you can find better seats elsewhere than on a shelter roof
More About:
dangerous
roof
safety