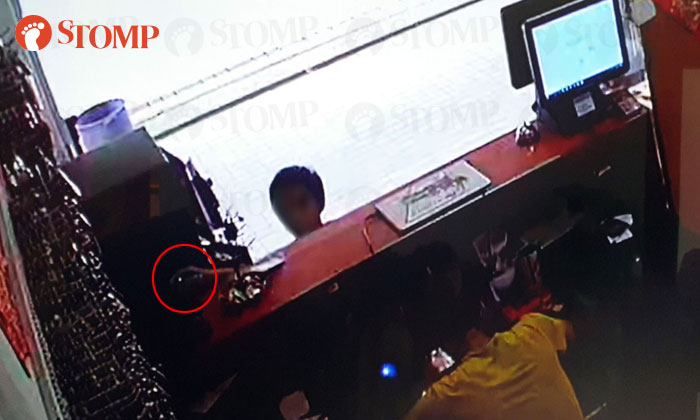 A boy was caught on video taking cash from a counter at a remote key duplication shop in Toa Payoh last month while the store's employee was distracted by his phone.

A Stomper, who is the outlet manager of Caeg Specialist at Block 72 Lorong 5 Toa Payoh, told Stomp the incident happened on May 21 at about 10.37am.

He said he had previously placed $288 in the mouth of a 'Pixiu' statue on the counter. A 'Pixiu' is a god beast in Chinese mythology that is said to attract wealth and good fortune to businesses.

On Sunday (June 17), he noticed the cash was missing and immediately reviewed footage from the store's CCTV camera.

In a clip he shared with Stomp, a young boy wearing no shirt and carrying his slippers in his left hand is seen approaching the store's counter.

He takes a peek at the employee who is playing with his phone and crouches as he reaches for the cash that is on the statue before he runs away.

"This boy is so daring," said the Stomper.

"I believe he is no older than 14 years old but was bold enough to remove his slippers before walking in and quietly removing the cash from the counter.

"Prior to this clip, the boy actually came in and out of the shop several times and I believe he made his move after realising no one was paying attention to him.

"The store has a welcome bell that goes off every time someone enters but the worker was so engrossed in playing his game he took no notice of the bell or the boy."

He told Stomp that following the incident, the worker has been fired. He added that this is not the first time, the guys had been distracted by his phone.

He also said he has since made a police report.