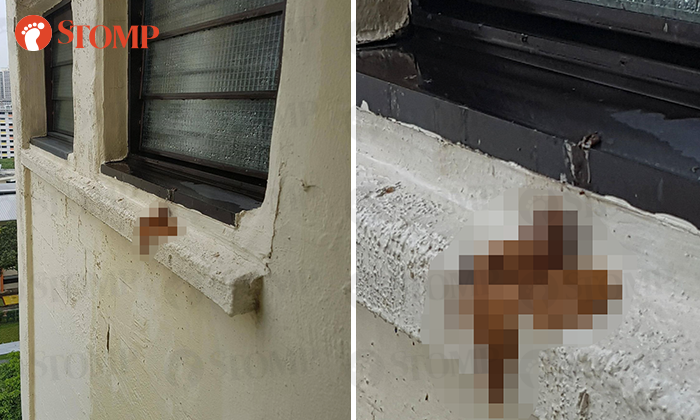 Stomper Roy was enraged after realising that someone had thrown faeces onto the ledge outside his bathroom window.

Apparently, this was not the first time that such a thing had happened.

The first case happened six months ago, in May.

Roy and his parents wrote it off as an act of mischief.

However, the same thing happened in September, which prompted him to write an email to the Town Council.

Said Roy: “The stench was overwhelming. It would always happen outside the same window.

"Since the September incident, we have kept that particular window closed.

"However, my niece and nephew came over on Sunday and they took a shower, so we opened the window. Then we found that someone had thrown faeces down again.

"It seems as if the culprit is deliberately doing this on purpose and targeting us.

"We know our neighbours from the floors above well, and we are on friendly terms, so we don’t know who would do this.

"It’s not the faeces that I’m concerned about. I’m worried about my parents’ safety as they are in their 70s and may not know how to protect themselves when such instances arise.

"For example, my mum cleaned the ledge both times in May and September. This can be dangerous for her."

Roy also told Stomp that he had lodged a police report and the incident was classified as an act of high-rise littering.

He added: "My parents did not want to go to the police, but after last Sunday, I felt that we needed to make a police report. To me, it is clearly an act of mischief."

Stomp has contacted the Potong Pasir Town Council for an official statement on the incident.