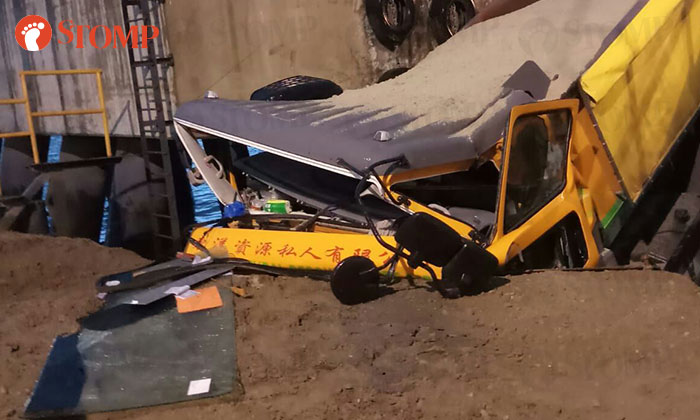 Submitted by Stomper A, Lyndon

A tipper truck was damaged after sliding off a ramp that tilted at the Changi Staging Ground on Wednesday night (May 23).

Stomper A’s father, who was in the vehicle next in line, witnessed the accident at Aviation Park Road which happened between 7pm and 8pm.

According to A, his father had been the next vehicle in line to use the ramp, when it suddenly tilted.

Photos taken by A’s father show the front of the truck completely smashed after sliding off the ramp and striking a mound of dirt.

The windscreen of the truck had fallen off, and debris littered the scene. 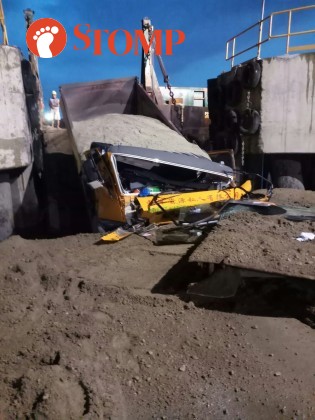 Fortunately, the driver reportedly escaped and was uninjured.

Said A: "My father said the driver managed to escape before it got worse."

The incident was also witnessed by Stomper Lyndon who had been cycling near the vicinity.

He snapped a photo and sent it to Stomp.

In response to a Stomp query, a spokesman for the Ministry of Manpower (MOM) said: "MOM was notified on May 23, 2018, of an incident at the Changi Staging Ground at Aviation Park Road.

"A driver was driving his tipper truck from a barge when the ramp tilted and the truck slid off.

"MOM is currently looking into the incident."

Related Stories
Female jaywalker hit by bike when running across road in Yishun, sent flying with motorcyclist
UPDATE: 6-year-old boy dies after getting trapped under bus in Choa Chu Kang
Motorcyclist and pillion rider taken to hospital after accident with car along Yio Chu Kang Road
More About:
accident
truck