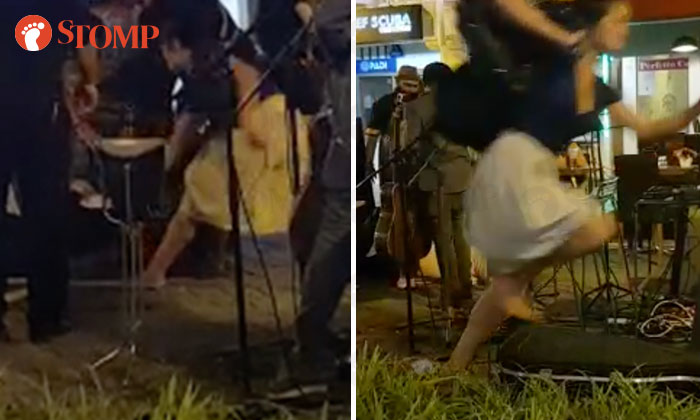 A woman attacked a man and took off with his haversack on Friday night (Jan 5).

The incident happened at 70 Bussorah Street in Kampong Glam at 9pm.

Stomper N was present at the time of the incident, and quickly took photos and videos which she sent to Stomp.

According to N, both the man and woman had claimed that the haversack was theirs.

The woman dragged the man onto the floor as he held onto the bag.

Said N: "She was kicking him in the face.

"Some passersby were telling him to let go of the bag.

"People always assume that the guy is wrong in such situations."

The woman then grabbed the bag off the man and ran off.

After about 10 minutes, the woman returned to the scene again.

N said that the police arrived at the scene at 9.15pm, and the woman was arrested.

She added: "She is a really strong lady considering that she is quite tiny in stature."

"A 41-year-old woman was arrested for being drunk and incapable.