TikTok video of 'cool and humble' Lambo driver in Yishun gets more than 1.5 million views 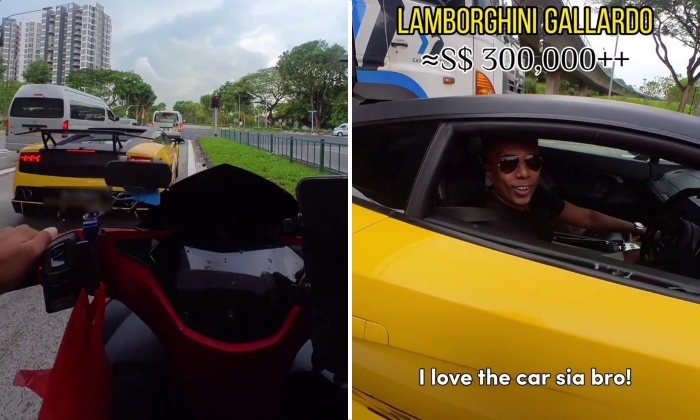 A video of a quick chat between a motorcyclist and a driver of a Lamborghini Gallardo during a stop at a Yishun traffic light junction has amassed more than 1.5 million views since it was uploaded to TikTok on Aug 7.

Stomper Mel highlighted the 43-second video to Stomp "in appreciation of a cool and humble Lambo driver".

"One netizen even commented he's the Andrew Tate of Singapore," said the Stomper.

Andrew Tate is a British-American former kickboxer and now controversial online personality with reportedly billions of views and a showy supercar collection.

The video was posted by a TikTok user named Koocester who is the motorcyclist in the video.

Shot from the point of view of the rider, the video shows Koocester coming to a stop next to the yellow Lamborghini at a traffic light junction.

As the driver rolled down the car window, Koocester said to him: "I love the car sia, bro. What do you do?"

The driver, who was wearing sunglasses, replied that he was "kind of unemployed".

"Unemployed? But what do you do to get this car?" asked Koocester.

"What do I do? I used to work in the construction industry," said the driver.

The rider then asked whether he could post the video on TikTok. When the driver said no, Koocester said he would blur the driver's face. The driver relented and said: "Can lah, just post, okay lah.'

Koocester fist-bumped the driver again to say thanks.

The driver jokingly asked: "You want to drive?"

"I can drive ah?" asked Koocester.

The driver shrugged and laughed in response.

The video ends with the traffic light turning green and the two moving off.

Singapore Edition: What do you do for a living? He’s definitely one of the friendliest owners I have met!

In the video's description, Koocester said: "He’s definitely one of the friendliest owners I have met!"

Inspired by US TikToker Daniel Mac, many of Koocester's other videos also show him approaching drivers of flashy vehicles and asking them what they did for a living.

One video from last year featuring a Porsche 997 Turbo and a Harley-Davidson Road Glide motorcycle has 3.1 million views.

In another video, Koocester met Taufik Batisah, who was driving a Mercedes-Benz W205. In answer to the TikToker's question, the Singapore Idol winner said: "I have a fried chicken store called Chix Hot Chicken. I sing and act sometimes. And right now, I'm in real estate."

@koocester I think he likes to sing.. | Singapore Edition: What do you do for a living? @Taufik Batisah ♬ original sound - Koocester

Asked if anyone has been rude to him when he approached them, Koocester told Stomp: "Actually, yes, there were a few, but I would say they’re only 1 per cent."

The 21-year-old former delivery rider said videos of Rolls-Royce and Bentley drivers were a bit harder to do and added: "But I still try to do a video although I get scared and nervous. They’re just more private in general which I understand."

Not everyone can be as cool as the yellow Lambo driver.