Tiffany Teo reconnected with herself after her first loss 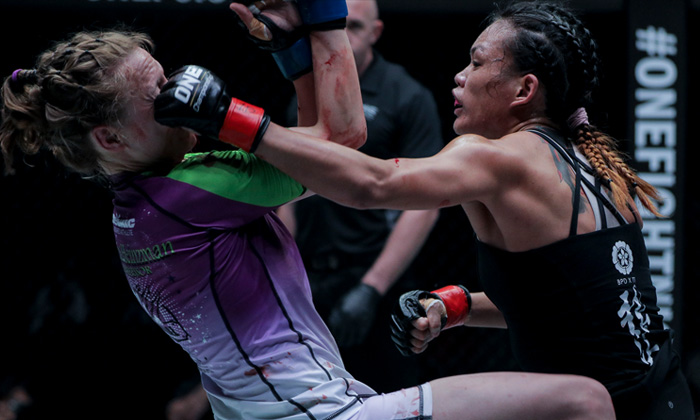 Last January, Tiffany “No Chill” Teo and “The Panda” Xiong Jing Nan battled it out to crown the inaugural ONE Women’s Strawweight World Champion at ONE: KINGS OF COURAGE in Jakarta, Indonesia.

The epic encounter would end with a referee stoppage, as Teo fell on her back following an offensive onslaught from Xiong.

Despite her eyes almost completely swollen shut, Teo seemed like she was still willing to get back up for more.

“I still knew what I was doing and I was still aware of what was going on around me so I just kept going. I felt like there was still a chance for me to win even though I was on the lower end of the fight.”

The loss was the first in Teo’s career, which snapped an undefeated run of seven wins in the cage. The emotional weight of the experience, coupled with a number of injuries that included surgeries to her retina, kept her away from the sport.

“I was out for training for a good two to three months I would say,” she shared.

“Even after I recovered, I still took some time off to focus on myself and re-evaluate things.

“It was an emotional experience for me because it was my first loss ever since I started competing in mixed martial arts and it was for the title.

"I put a lot of time and sacrifice to get that title shot. It took me a while to get back to training.”

During her time off, Teo spent more time on yoga and meditation to keep her mind away from the sport she was so passionate about. The athlete dubbed as “No Chill” by her teammates because of her relentless approach to training finally took time to “chill” and reconnect with herself.

After months of being away from the cage, Teo will finally make her much awaited return to ONE: HEART OF THE LION at the Singapore Indoor Stadium on November 9.

“I felt like I learned way more from this loss than from my wins,” the Team Highlight Reel representative admitted.

“I realized a lot of things have to be worked on, not just the technical aspect, but also the psychological and other aspects of the game.

“I’ve been trying to work on it for the past few months, and I hope that when I step back in the cage in November, all my fans, my friends, and my family can see the change in me.”

“I’ll be a different warrior this time around.”

The card will also feature two world champion versus world champion bouts, with one of them being ONE Women’s Atomweight World Champion Angela Lee challenging Xiong for her world title – a bout Teo will surely pay close attention to.

“Both of them would be someone I would like to challenge myself against,” the Singaporean contender said.

“No matter who wins, I feel like it will be a good challenge for me.”