Who is leaving these thumbtacks around Yishun? Police investigating 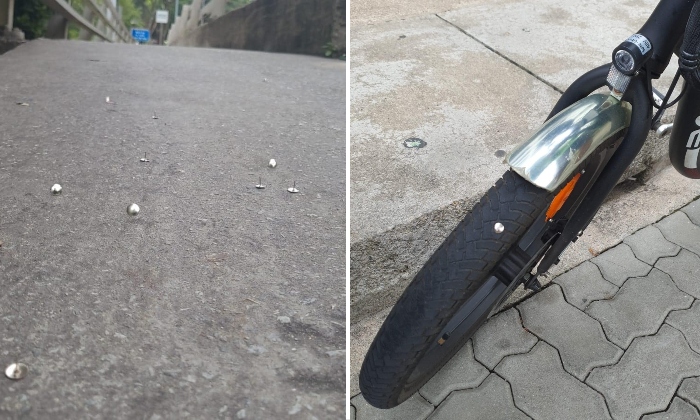 The police are investigating a series of incidents where thumbtacks have been found scattered across pavements in Yishun.

The police said “reports were lodged and investigations are ongoing”, as videos and pictures circulating online show members of the public picking up thumbtacks from pavements.

In one incident, a thumbtack was lodged in the wheel of a food delivery rider's bicycle.

Online posts allege that the metal thumbtacks have been appearing since Monday.

Speaking to Mothership.sg, one food delivery rider said he heard that “at least 20-30” e-bikes have required a change of tires after they were punctured by the thumbtacks – all along various parts in Yishun.

The man, who wanted to be known only as Mas Attitude, said that riders began alerting each other about the thumbtacks via WhatsApp on Sept 19.

He added that the issue was reported to the police on the same day.

"Cannot be someone accidentally dropped it, confirm someone intentionally put it there", Mas Attitude said.

Whoever put the thumbtacks there is "disturbing us from earning a living", he said, adding that changing a tire typically costs riders around $50.

"Can you imagine if one day (the tire) bursts twice?"

Related Stories
Angry at your delivery rider for taking so long with your food? Think twice
Ordering a dozen 1.5-litre bottles of water from GrabMart? Spare a thought for the delivery rider
Food delivery rider warns of wasted trips to already-closed F&B outlets that still took orders
More About:
delivery
rider
bicycle
Yishun