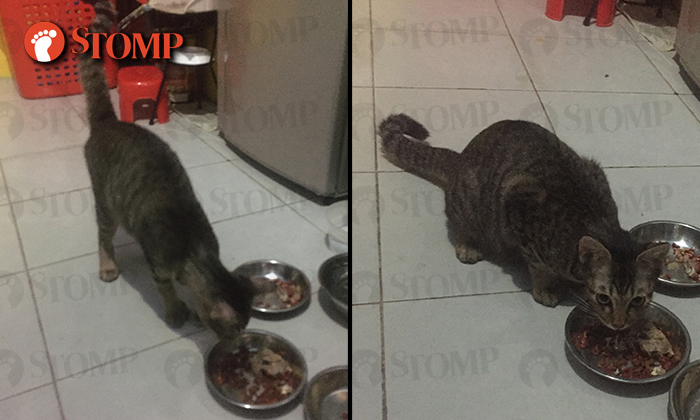 The cat, a tabby, showed no signs of fear, proceeding to eat from the cat bowls that Amiz had set aside for his five pet cats.

According to Amiz, the tabby was quite fierce, and his cats went into hiding upon noticing the intruder.

It stayed for a few hours, before leaving at around midnight.

“I think the cat belongs to someone.

“My son told me that he has seen it loitering on the 4th storey before.

“I wouldn’t mind adopting it otherwise.

“I hope she finds the way back to her owner soon.”

This comes in light of another incident reported by Stomp earlier, in which a cat broke into a HDB resident's home.

Related Stories
'Aggressive cat burglar' who broke into flat at 1am thwarted thanks to police and SCDF
A real scaredy-cat rescued from 12th storey ledge in heart-stopping video
11 Bishan stray cats go missing, believed to have been caught by van driver in his 20s
More About:
cat
funny
heartwarming