Three accidents, one fatal, in lead up to Chinese New Year 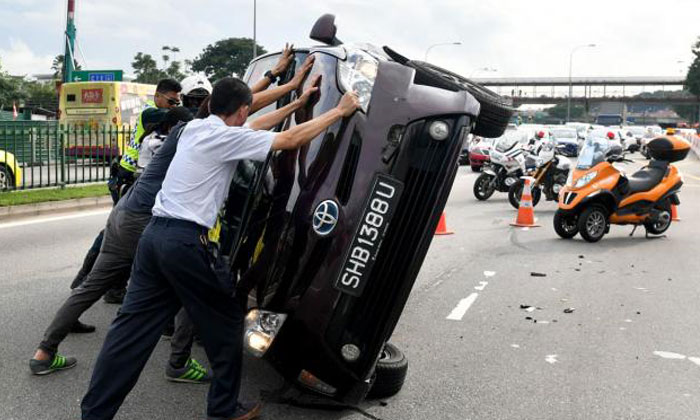 A motorcyclist died on Wednesday afternoon on Admiralty Road after a collision with a prime mover.

The factory worker, 54, had three children between the ages of 17 and 24, The Straits Times reported.

He died on the spot.

His wife, a 40-year-old housewife, told Lianhe Wanbao she had prepared the ingredients for the family's reunion dinner today and was sad her husband would not be with them.

The first involved a taxi, a white Volvo and a motorcycle at about 8am, with the taxi landing on its side.

An hour later, an Uber car collided with a lorry just one bus stop from the first accident.

Mr Koh Kar Koon, 50, a contractor from Fibrwrap Construction, was doing concrete-strengthening works with his workers when both accidents occurred nearby.

He and his workers pulled out the taxi driver and his passenger from the vehicle.

Mr Koh said in Mandarin: "After we heard the crash (of the first collision), we saw the taxi had flipped on its side. I was shocked at first, but we quickly ran over to help."

The customer care officer told The New Paper: "I'm so thankful no one was injured, especially since it is so close to Chinese New Year.

"It was a shocking experience I will never forget."

Mr Koh said: "I don't think I did anything noble. This is what we all should do as human beings to help each other when in need."