Threats to leak videos of married businessman having sex with another man: 3rd offender jailed 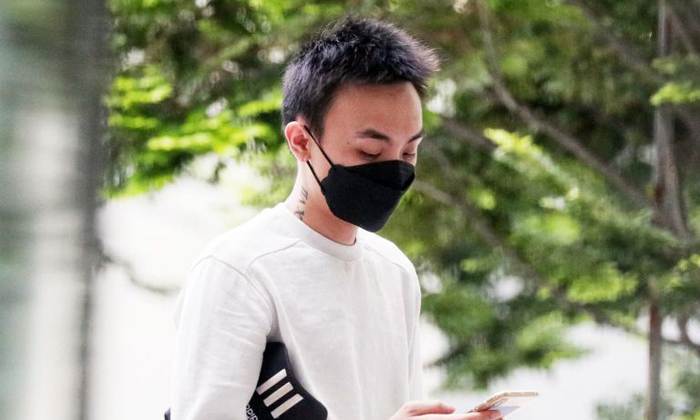 Three men tried to extort $60,000 from a married businessman after one of them, who was his personal assistant at the time, secretly recorded him having sex with a male partner on at least five different occasions.

The 53-year-old victim managed to lower the proposed sum to $50,000 and the trio decided to accept the offer.

But all three offenders were arrested on March 13 last year and charged in court the next day before any money could change hands.

One of them, Daryn Ho Yong Jian, now 24, was on Friday (Nov 19) sentenced to 18 months' jail after he pleaded guilty to one count of criminal intimidation.

The Singaporean was the third offender linked to the case to be dealt with in court.

Two other men - the victim's former employee and Tan Yong Jian - were given jail terms earlier this year after they admitted to their offences.

The businessman and his former personal assistant, 24, cannot be named due to a gag order.

In late 2019, the personal assistant secretly installed a camera in the businessman's home.

He set the device to motion notification mode so he could be alerted through an application on his mobile phone when someone was in the room.

He was able to view the goings-on in real time and make recordings. He left the camera in the businessman's house for about three weeks.

During that time, he managed to record his boss having sex with another man on at least five occasions.

On March 9 last year, the employee met Tan, then 24, and Ho and showed them the videos.

Deputy Public Prosecutor Zhou Yang said that the trio were aware that the victim was a "person of means" and decided to use the videos to extort money.

They agreed that the employee would get 50 per cent of the extorted sum while the other two would each get 25 per cent.

The employee sent his two friends the videos and gave them the businessman's contact number.

The employee and Ho later deleted the videos from their mobile phones to avoid detection, leaving only Tan in possession of them.

Later that day, Tan inserted an unregistered SIM card into his mobile phone and sent the businessman three videos and the following message: "I have some videos and pictures at my disposal that I think will be of interest to you."

When the victim did not reply, he sent another message and said he would share the clips. The businessman lodged a police report on March 10 last year.

The offenders waited for a reply but did not receive any.

DPP Zhou said: "They decided that they should proceed with their extortion attempt and... decided to demand $60,000 in cash from the victim."

At 7.14pm on March 12 last year, Tan sent the victim a message stating: "60k for these videos and pictures to be deleted and not leaked. Let me know your decision."

The businessman replied later that evening, stating that he needed time and could possibly "squeeze out" $50,000. The trio decided to accept the offer.

The businessman suspected that one of his personal assistants, who had access to his home, could have recorded the videos and the trio were arrested on March 13 last year following an investigation.

While out on bail, Tan persisted in the extortion attempt and roped in another man, 29-year-old Mahadevan Edwyn, whose case is pending.

On Friday, Ho's bail was set at $30,000. He was also told to surrender at the State Courts on Dec 9 to begin serving his sentence.

Related Stories
Jail for ex-NUS student who stalked woman on campus, hacked into her Telegram account
Man harassed married woman with lewd and threatening messages after she ended affair
Man posed as Caucasian on Tinder to get nude pictures, extorted victims for sex
More About:
sex
threaten
extortion
court