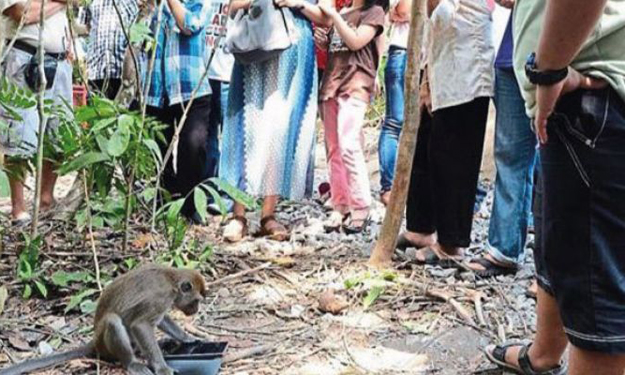 Thousands of people - some from as far as Singapore - have been converging in Jakar, Sarawak, after news went viral that many have struck it rich in 4-D lottery, thanks to a monkey called Anong.

The town, about an hour's drive from Sibu, is especially packed on weekends and during 4-D draw days, reported Malaysia's The Star.

According to The New Paper, a resident named Mr Lau said there could be as many as 1,000 people trying to get close to the monkey.

He said: "The monkey was in fact spotted by passers-by some months ago. People stopped by to give it food to eat. They tried their luck at 4-D betting after the monkey climbed onto the roof of their car and most of them became instantly rich."

Then about two weeks ago, the news went viral on social media.

A 43-year-old resident from Sibu, rushed to see Anong with her son and daughter after hearing the story.

But her son had his tablet device snatched away by Anong, who made short work of its cover with his sharp teeth.

The woman took this to be some form of approval by the monkey, telling The Star that she would use the tablet's serial number for her number selection.

One businessman expressed some fear for Anong and was concerned that with all the hype “somebody might kidnap the monkey”.