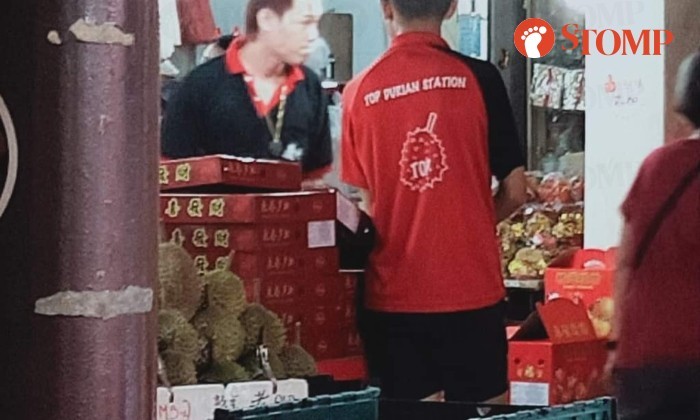 But he managed to end up feuding with the stall that sold them to him.

Stomper Robert claimed the stall was "unscrupulous" and used "underhanded methods" to get him to buy more durians. The stall said it was "a misunderstood communication".

The Stomper claimed the staff pushed him around. The stall said Robert was "emotionally unstable" and he verbally attacked the staff until his saliva could be felt on the staff’s face.

Top Durian Station said it had made a police report. The Stomper called the stall a "tenacious adversary". 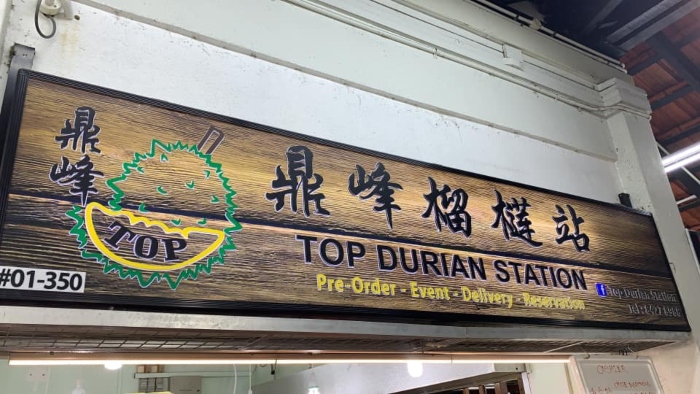 It all started on Jan 5 at about 7.30pm when Robert went to the Top Durian Station outlet at Block 156, Bukit Batok Street 11.

"A young man kept insisting that I should buy four durians so that I would get one free," said Robert, who declined the offer because he did not want to walk home carrying so many durians.

"After he had opened the third durian to show me… he suddenly offered to give me a musang king durian free."

Since the durian was free, the Stomper accepted the offer.

But when he went to pay for the four durians, a "pretty lady" began to weigh the musang king durian, implying that he would be charged for it. He stopped her and told her it was supposed to be free.

"She immediately claimed that I had heard her fellow worker wrongly," recounted Robert.

"I kept insisting that the young seller offered the free durian to me and even approached him to verify my claim. To my great consternation, he rebuffed me and pretended that nothing like what I had claimed happened."

So the Stomper rejected the fourth durian and purchased just the three Black Gold durians. "I paid $110, which was reasonable at $15 a kilo," he told Stomp.

"The straw that broke the camel's back was when I was walking away indignantly, a scrawny and heavily tattooed bespectacled young man pointed his finger to his wrist and told me it was time for me to go home and it was just 8pm."

"How rude can he be by ordering me to go home as if I were his son!"

The Stomper posted about the incident in the Complaint Singapore Facebook group.

Top Durian Station saw the post and shared its side of the story on its Facebook page:

“The said customer, Mr Robert Yeo, came to our store looking to purchase three Black Golds," recounted the stall in its Facebook post.

“Our staff vaguely informed him that purchasing five Black Gold will entitle him to one free Black Gold. This is simply the way our in-store promotion runs, which is 'buy five Black Gold, get one free'. Regular patrons can vouch for us on this. And we do have prominent sign boards being put up in-store and via our Facebook page on such a promotion.

"A misunderstood communication by Mr Robert is likely to have occurred in this instance. We would like to emphasise here that at no point in time did we force Mr Robert to make his purchase.

"Mr Robert had earlier acknowledged that he would go ahead with the 'buy five, get one free' promotion, and our staff then went on to select and open the durians for him.

"Mr Robert then asks us how come there was a fourth durian being weighed, and that it should be free as agreed.

"Our staff explained to him nicely about our promotion, which is 'buy five, get one free', and not 'buy three, get one free' as he had proclaimed. There could be a communication error earlier on with regard to the promotional freebie.

"In fact, we informed Mr Robert that he has the right to refuse the purchase and that he can void his purchase on-site. However, Mr Robert then decided to go ahead with his purchase of three Black Golds and left our store rather unhappily."

Indeed, Robert was unhappy enough that he went back to the stall the next day.

"To tell the durian sellers of the stall not to use such underhanded methods to increase the sale of their durian," said the Stomper.

"Guess what? They surrounded me and pushed me around, especially another young man with a ponytail who claimed that his courage was greater than mine and kept shouting as loud as he could into my left ear as he was a head taller than me. He even challenged me to a fight. Luckily, an old man sternly told them to stop the ruckus and let me go.

"I believe they are Malaysians hired by a Singaporean. This stall is definitely what we call in Chinese a 'black shop'. Beware, everyone, of this stall and the underhand methods that the sellers of the durian in this stall use.

"They are unscrupulous and are cowards, especially, the one who offered me a free musang king durian and later didn't even dare to utter a word to refute me. I really feel sorry for him. He has to carry this shame with him for a long, long time. The boss even has the temerity to make a police report against me."

Indeed, in its Facebook post, Top Durian Station said it had made a police report about the incident.

Asked whether he made a police report himself, Robert told Stomp: "I couldn't care less about making a report because they didn't hurt me physically, but they abused me verbally as one of them said he would have sex with my deceased mum."

Here is the stall's side of the story: "After heading home, it seems that Mr Robert wasn't satisfied with his purchases, 'felt cheated', and came back to our store on two separate occasions, hurling his loud voice towards our staff. Mr Robert did that while standing in close proximity to our staff's ears, and this went on despite our staff trying to explain things nicely to him."

Top Durian Station claimed the Stomper said: "Malaysians are a totally dishonest lot, and they should all go back to Malaysia rather than to work in Singapore if they are unable to fulfill their duties well."

The stall continued in the Facebook post: "On the second occasion, Mr Robert came back to our store to create another verbal ruckus, allowing his emotions to get better of him. At that point in time, Mr Robert was totally emotionally unstable, and the verbal attack went on for a good five to eight minutes, to the extent of Mr Robert's saliva being felt on our staff's face.

"Our staff tried hard just to ignore him after Mr Robert refused any form of explanation. However, Mr Robert kept harping on, and continued with his verbal hurling.

"Our staff then got quite irritated, as he wasn't able to concentrate on store front operations. As a result, an altercation ensued, with some other staff members also trying to reason out with Mr Robert.

"This explains Mr Robert's statement of 'being surrounded and getting intimidated'. It is also vital to point out that we did not push Mr Robert. One of our staff was trying to pull both sides aside upon concerns of the matter escalating into a bodily scuffle. We have the CCTV footage to prove this.

"Mr Robert had also openly challenged our staff to land a strike on him, whereby our staff maintained his composure and remained calm. We decided against posting the CCTV evidence, as this will make the entire situation more awkward for Mr Robert. We respect Mr Robert as our patron, and we just wanted this matter to be addressed well, and move on with our business flow."

Top Durian Station has since shared CCTV footage with 8World News. Unfortunately, the CCTV did not record any sound.

"Gosh! I think he is hoping for a final showdown with me to see who will emerge vindicated," Robert told Stomp.

"What a tenacious adversary. Well, he has his durian business to think of. He is so afraid that his already tarnished image gets tarnished further."

In response to a Stomp query, Top Durian Station shared a link to the 8World News article.