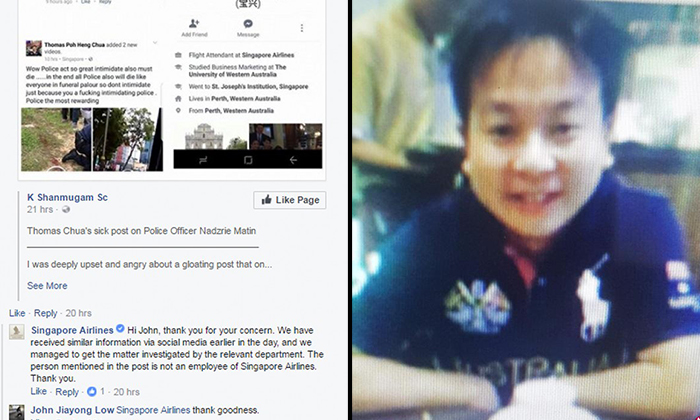 Singapore’s current most hated man Thomas Chua has made headlines again -- this time, for allegedly threatening to hire a contract killer to kill a girlfriend’s estranged husband.

The 39-year-old Chua came under flak from netizens after posting insensitive remarks about a deceased Traffic Police officer, Staff Sergeant Nadzrie Matin, who had ‘handed him summons’.

In an earlier story reported by Stomp, Staff Sergeant Nadzrie Matin had died in the line of duty in an accident at Serangoon Road on Jun 1.

Chua's comments earned the scorn of many, and Minister K Shanmugam even openly condemned his post, calling it ‘sick’.

Investigations unveiled that Chua had started seeing a woman two and a half years ago The woman was already separated from her husband.

For reasons unknown, Chua got into an argument with her estranged husband, and started sending him threatening emails, reports Shin Min Daily News via Lianhe Zaobao.

The woman's 40-year-old husband revealed that he had been harassed by Chua for over a year.

“He wrote a few posts on Facebook, saying that I was taking drugs."

However, the harassment soon intensified, with Chua sending him threatening emails.

“He started saying in his emails that he would hire contract killers to kill me and the police.

“I didn’t report to the police then.”

It was only until one morning last month, when he had heard someone whistling at the foot of his block.

When he went to investigate, he found Chua, who shouted at him.

After the incident, the victim lodged a police report:

“It wasn’t just me who called the police.

“Many neighbours who woke up from the noise also lodged police reports.

“I told the police what happened, including the threatening emails.”