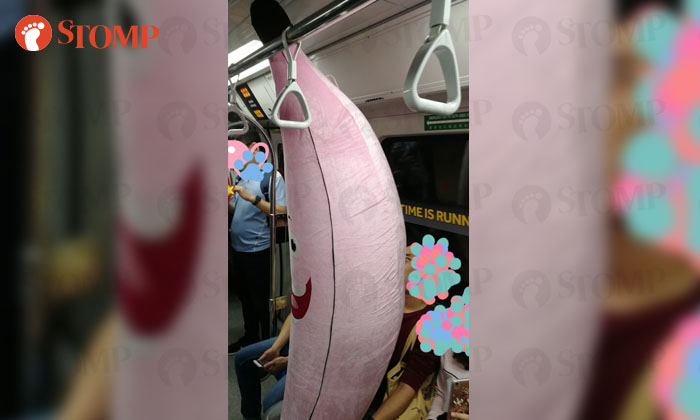 Have you ever seen a two-metre-long banana smiling at you on the train?

Well, Stomper Brian saw one in the MRT train while he was headed home to Ang Mo Kio just yesterday (Dec 17).

He boarded a train from Dhoby Ghaut MRT Station at about 9.54pm and saw a huge pink banana soft toy 'standing' in the train.

In actuality, the tall soft toy was being held by a man in a black shirt who was seated.

In a picture Brian sent Stomp, the soft toy, complete with a set of eyes and a mouth, was towering over grab handles hanging from a railing above.

Brain told Stomp: "I was amused that such a huge soft toy could enter the train in the first place.

"There was a woman giggling at the man holding the soft toy, I think she was his girlfriend.

"When the man and woman wanted to alight at Bishan MRT Station, she took a video of him while laughing.

"Both of them looked happy."

Related Stories
How many objects can you hang at the back of a lorry?
You'll be amused to see what's hitching a ride on this car along Orchard Boulevard
Tampines resident emails MP Baey Yam Keng for help -- over a cockroach
More About:
unusual
train