This pup is so obsessed with toys, it takes a new stuffed animal to bed every single night 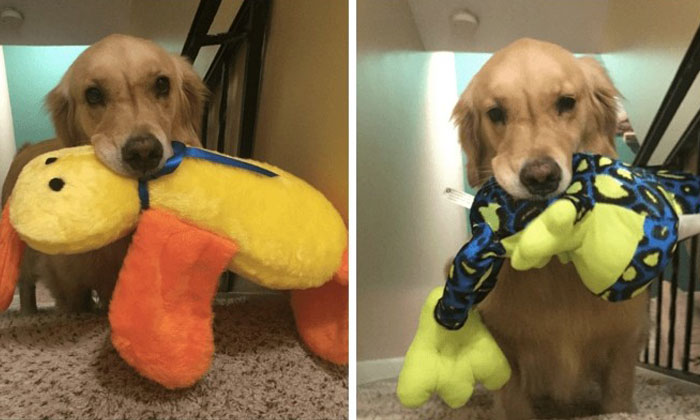 The competition for being the greatest dog on Instagram is undoubtedly fierce, but this little fella has recently won the hearts of many netizens, reported Distractify.

Meet Mojito, a three-year-old Golden Retriever that is obsessed with toys. Obsessed may be an understatement.

According to the site, the pup's dependence for toys came from an abundance of them.

"Mojito has tons of toys ... way too many," Kim Downie, Mojito's mom, told The Dodo. "She insists on picking one out every time we go to the store."

How does one say no to those adorable puppy eyes right?

Though Mojito loves her toys, she enjoys sharing them with her siblings too. AWWWW.

And if you think that's not adorable enough, she has the cutest bedtime routine ever -- she picks out one new toy every night to bring to bed with her.

However she only brings them back down to the living room once she's done with them.

"If we move them back downstairs, she will carry them right back up," Downie said.

Certainly way too much cuteness to handle.

According to Distractify, this cute habit has been going on for the past year and a half, and it doesn't show any signs of stopping anytime soon.

And we sure hope this doesn't stop too.

"She is very specific about what she chooses to take to bed. She will search the house and empty her toy boxes until she finds whatever one she is looking for," Downie said.

Mojito recently became a therapy dog and we're sure she'll do great, she certainly knows a lot about comfort.

We're just glad this goofy, toy-obsessed pup has furry friends to keep her company while she dreams.

Can't get enough of this pup and her bedtime routine? Check out her Instagram for your daily does of Mojito shenanigans.