This is why you shouldn't cut across multiple lanes 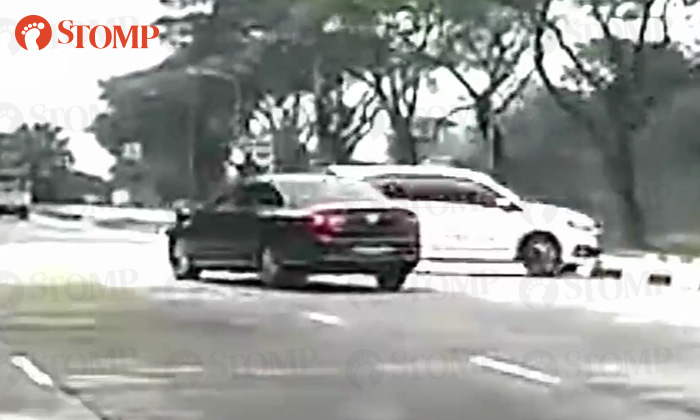 A driver who cut across two lanes to allegedly make a U-turn ended up colliding into another car along Gambas Avenue, at about 12.15pm on Thursday (Jul 19).

In a video shared by Stomper Gil, a white car is seen going from the left-most lane to the right-most lane, while cutting across two lanes in the process.

A black car, that was unable to stop in time, is then seen crashing into the white car, causing the latter car to make almost a 360-degree turn.

Gil said: "Cutting across multiple lanes to make a U-turn is always a bad idea.

"I did not stop because I have a passenger in my car and from what I saw, there wasn't any serious injury.

"I hope this video is able to reach both parties that were involved.

"Hopefully it can assist them in their insurance claims."

Related Stories
Driver weaves in and out of traffic like he doesn't know what he's doing on PIE
Honda Fit driver, surely this is not how you are supposed to turn into the main road
Win liao lor, impatient driver SLB3906P cuts across 3 lanes at once at Somerset
More About:
cut lanes
accident
collision
dangerous
dangerous driving