Things you can do to find your mum in Expo 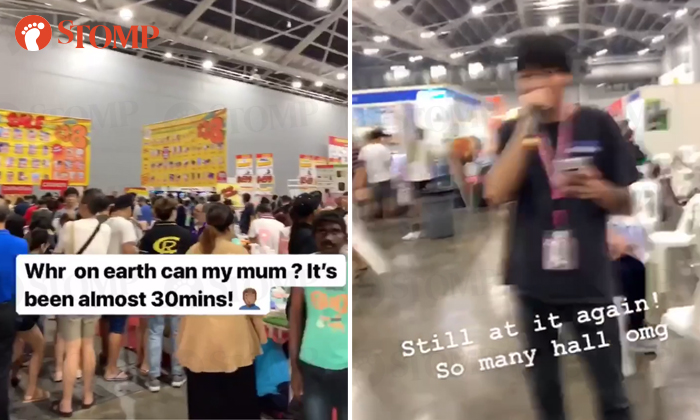 You are not alone if you have been unable to find your parents when all of you were out shopping.

Stomper Leerocka shared videos from his friend's Instagram Stories when he was separated from his mum at an expo.

Instagram user, Nazri, told Stomp that he was with his mum at the Singapore Expo on Sunday (June 30) when they got separated.

He said: "It's packed with people everywhere. One moment she's there, the next she's gone."

Since Nazri's mother did not have a phone, he embarked on an adventure to find his mother.

Nazri's first step was getting a microphone to make an announcement.

Paging for his mum, Nazri announces that he will be waiting for her at the exit of the expo.

After about 30 minutes, there is still no sight of his mother. This is when Nazri begins shouting for his mother as loud as he can, and shocked faces can be seen in the video.

Nazri said to Stomp: "I was worried about her safety. She's old and gets tired easily so she can't walk much. I was just worried."

When this fails, Nazri moves on to a stage nearby where an emcee makes another announcement paging for his mother.

Nazri told Stomp that it took about two hours for him to find her..

He teasingly asked her: "Where did you go missing to?"

His mother said: "I waited there! Move over a bit, I want to take a photo."

Although he sighs, Nazri's smile is enough to know that he is glad they are reunited.

Related Stories
Woman who won netizens' hearts with Merlion video is Thai influencer
How motorcyclist reacted to cabby who flashed middle finger on BKE will make you LOL
Vlogger tries to eat live octopus -- but gets it stuck on her face instead
More About:
lost
funny
reunion