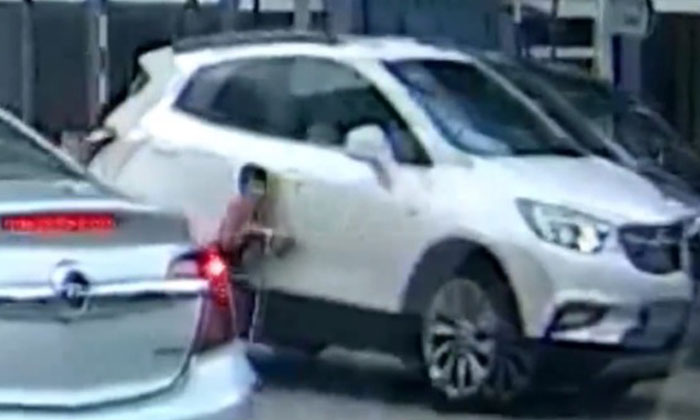 A video posted online shows a boy on a kick scooter getting hit by a car while crossing the road junction of Punggol Road and Compassvale Drive.

The video was captured by an in-car camera of a vehicle nearby.

The boy seemed to have crossed the road when the red man on the traffic light was showing.

The video first showed a black car and a silver car, which were going straight, having to brake abruptly it avoid hitting the boy.

The boy continued on as vehicles from the opposite direction of traffic approached.

Suddenly, a white car brushed against the boy, causing him to fall.

The vehicles in that lane stopped and the boy stood back up.

The Facebook caption starts out with a quote from Chua Li San, who said: "A little boy attempted to scoot across the road without looking at the traffic. A white car on the other side brushed across beside him, causing him to look shocked and confused.

"I was screaming deep in my heart but there was nothing I can do. I hope he is not hurt."

It is unclear if Chua is the person who shared the video with ROADS.sg.

The caption also stated that if the car had hit the boy instead of the boy hitting the car, it could have been fatal for him, and that the driver of the white car would also have been implicated even though it is not his fault.

In the comments, many people said the boy was lucky for escaping death and that he should be taught proper road safety behaviour.

Facebook user Kenny Toh said: "Parents shouldn’t allow them to go out alone and should educate them the traffic rules."

Facebook user James Lau commented from experience of his own and said: "Very common occurrence (not joking), yesterday I witnessed two kids on e-scooters doing this and they almost got hit."

Razak Ismail, a Facebook user, was concerned for the driver's wellbeing and said: "Really hope the driver will not not be charged in any way whatsoever."

Related Stories
10-year-old boy on scooter taken to hospital after getting hit by motorcycle at Yishun
Boy cries in pain while passers-by try to free his leg trapped in bicycle frame
Biker allegedly injures boy in hit-and-run in M'sia, leaves licence plate behind
More About:
accident
boy
hit