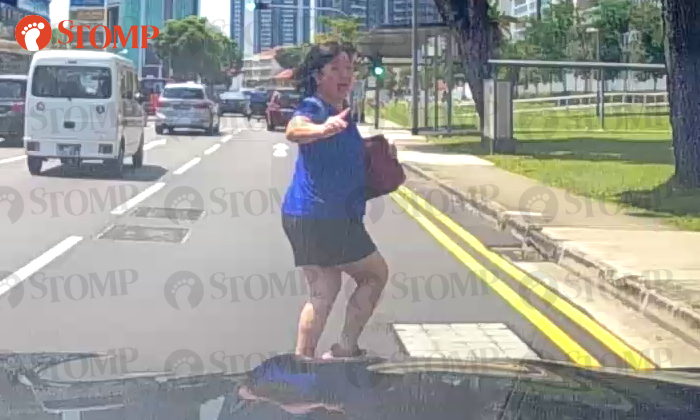 A woman was caught on camera dashing across the road despite busy traffic and narrowly avoiding an accident with Stomper Gary's car.

Gary, who submitted dashcam footage of the incident, said it occurred along Bendemeer Road on Monday (Jan 13), at around 1pm.

In the video, a man in a blue shirt can first be seen jaywalking across the road without incident.

As Gary continued driving, a woman suddenly appeared and ran across the road.

Gary, whose view of the woman was blocked by other vehicles on his left, managed to stop in time and avoid hitting her.

The woman can be seen with a shocked expression following the near-collision and raising her hand, apparently in apology.

Gary told Stomp: "I was relieved that I did not run her over even though it was her mistake to cross the road in that manner.

"As you can see, my view was totally blocked by the vehicles on the left.

"It is fortunate that at about 70 metres away from the incident, there is a right turn to the Bendemeer Light housing estate which is my home. As I was preparing for that turn, I had slowed down slightly and thus managed to stop in time and avoid knocking her down."

Interestingly, a pedestrian crossing is just slightly further up the road.