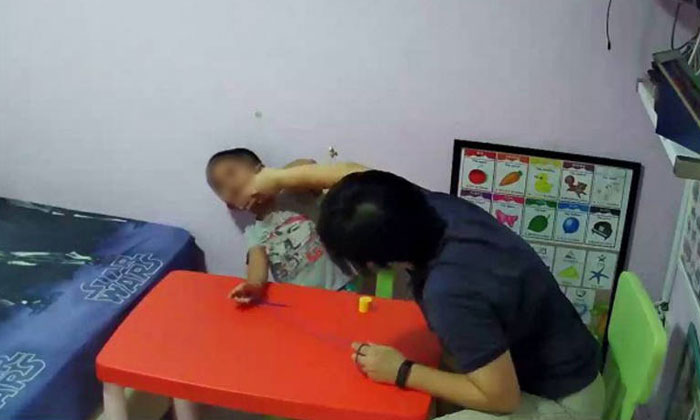 The police and Ministry of Social and Family Development (MSF) have responded to a case of a boy with autism and attention deficit hyperactivity disorder (ADHD) allegedly being abused at home by his therapist.

The incident was brought to light when the boy's mother posted clips taken from her son's therapy session on her Facebook page on June 30.

In the video, the therapist appears to be handling the boy roughly as he cries and screams.

The police said in a statement on July 3 that they are aware of an online posting accusing an Applied Behavioural Analysis (ABA) therapist of abusing a young child with autism.

They said that on March 20, 2019 at about 11.30pm, they received a report lodged by the child's father who said his six-year-old son had been physically abused by a 28-year-old female therapist earlier that day during a therapy session in their home.

"Medical examination of the boy at KK Women’s and Children’s Hospital was carried out on the same day and no physical injuries were found," the statement said.

The police said they had conducted investigations, including reviewing the CCTV footage that captured the entire 90-minute therapy session involving the boy and the therapist and interviewed the therapist and other relevant parties.

"Upon the conclusion of investigations, the police, in consultation with the Attorney-General’s Chambers (AGC), issued a written advisory to the therapist," the statement said.

"This outcome took into consideration the context of the therapist’s actions, and the interactions and dynamics between the boy and the therapist during the entire 90-minute session, which the nine-minute extract of the CCTV footage that had been shared online did not fully reflect.

"The outcome of the investigations was communicated to the family in August 2019.

"The police understand that the family had consulted lawyers and had received legal advice on the matter.

"After receiving further representations from the family in January 2020, the police conducted more interviews and sought further guidance from AGC.

"This was made known to the family at that time, and the police have been in contact with the boy’s family.

"The police are currently still in the midst of the review."

The MSF issued a statement regarding the matter on their Facebook page on July 3 at about 2pm.

Allegation of abuse of a child by an ABA therapist A video started circulating online recently of an Applied...

In the statement, MSF said it has reached out to the family to establish facts and to offer support.

They have also confirmed that the therapist involved is not currently under the employment of any of the 31 Early Intervention (EI) centres that MSF provides funding to and has direct oversight of.

Stomp earlier reported that the therapist, who was working with special education school AutismSTEP at the time of the incident, has since been dismissed.

AutismSTEP said in a statement that they "have been open to discuss claims or recompense matters" and "remain committed towards a mutually agreed resolution".

The family informed Stomp they have yet to receive any monetary compensation from AutismSTEP after they asked for a refund of the course fee from the school.

Related Stories
AutismSTEP says therapist who manhandled boy with special needs in viral video has been sacked
Toddler scalded by maid: 8-year-old sister blames herself for incident, MOM investigating agency
Maid in Buangkok arrested after allegedly scalding toddler with boiling pot so that she could go home
More About:
child abuse
autism
sacked