The truth behind 'ghostly figure' spotted at Yishun multi-storey carpark 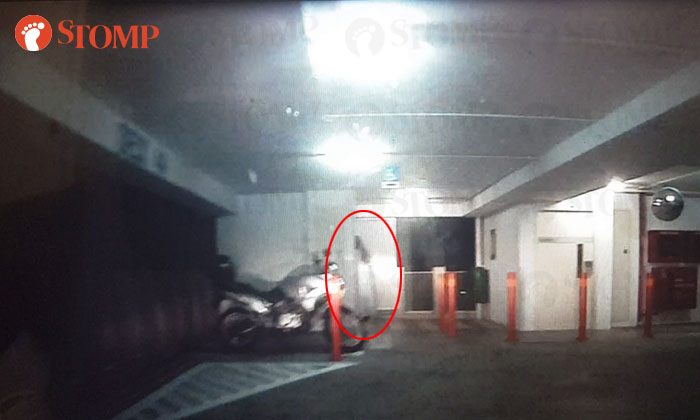 A Yishun resident had a 'close encounter' when she was driving in the multi-storey carpark at Block 317 Yishun Avenue 9 on Monday night (Sep 2).

Stomper Meko told Stomp she saw a 'ghostly figure' near the lift that caused her to have chills down her spine.

After the video was posted, Stomper Najib, who lives in the area, alerted Stomp to what he saw.

"I heard a loud scream outside my home somewhere between 9 and 10pm," he said.

"I looked out my window thinking that there was an emergency or accident and saw that some of my neighbours from the opposite block were looking out their windows too.

"From where I was, I saw three people on one of the floors of the multi-storey carpark acting out a scene.

"One of them was dressed in a long, white dress and was wearing what looked like a wig as well."

When Stomp reached out to her, she explained that she was helping a friend film a video project for school.

"One of my friends tagged me and I laughed," she said.

"We were actually in the carpark to film a short film for my friend's school project.

"The idea was that this guy encountered a ghost while walking home from school.

"We filmed it without thinking and felt very bad that we might have scared anyone.

"I saw from the comments that some people were really freaking out.

"I just want to say sorry on behalf of my friends.

"We really had no intention of doing that."

Kim also shared with Stomp the final cut of the video she filmed with her friends.

Check it out below.

Related Stories
Video of young Thai girl talking to her "imaginary friend" will make your hair stand
Video of woman in white crawling up pillar will give you chills
For real? Chinese exorcists claim house is haunted by 30 'Jiangshis' and more than 100 female ghosts
More About:
supernatural
ghostly
creepy
scary
Yishun
carpark