The Singapore spirit: Guess what these people are queuing for at Northpoint City 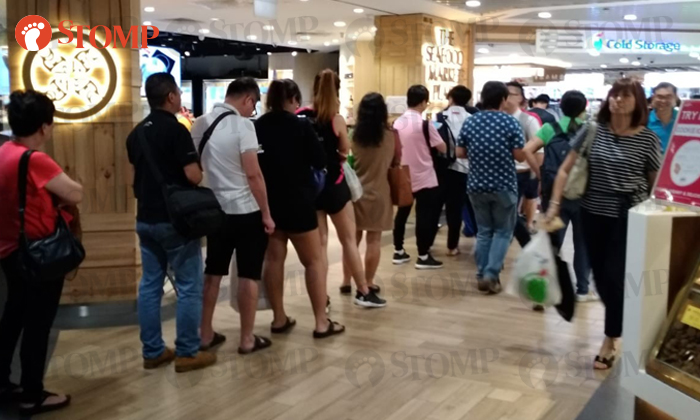 What do concert tickets, iPhone launches, Sanrio merchandise and Singapore Pools have in common?

They all draw long, snaking queues in Singapore.

A Stomper was amused to see a long line of people at Cold Storage when she visited Northpoint City at around 4pm on Thursday (March 28).

But instead of shopping for groceries, they were queuing to buy lottery at the Singapore Pools counters in the supermarket.

The Stomper said: "When I first reached there, the queue was still within Cold Storage.

"I walked past again at 5.30pm and there was a 'snakey' queue, which is when I took photos."

Thursday's Toto draw had a prize pool of over $9 million and saw two Group 1 winners.

Unfortunately, none of the winning tickets were sold at this particular Singapore Pools outlet.

In February this year, the two winning tickets for the Toto Hongbao's $13.6 million draw were both sold in Yishun -- Sheng Siong at Junction 9 and Cold Storage at Northpoint City.

Related Stories
Fight breaks out at launch of Adidas-Pharrell Williams collection at Pacific Plaza
People queue overnight for opening of new Gong Cha outlet at SingPost Centre
Biker stuck in 1-hour jam at JB Customs: "It's usually not like this"
More About:
queue
toto
Yishun
supermarket