The kampung spirit is strong among residents at this HDB block 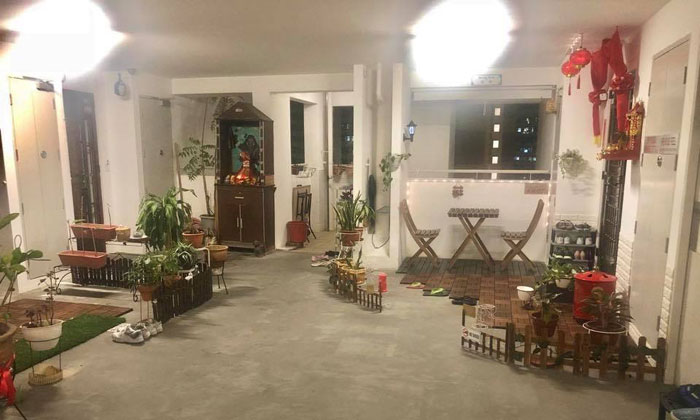 Many of us living in Housing Development Board (HDB) blocks are used to having our common corridors show little to no personality.

However, residents living in a certain Choa Chu Kang block have taken pride in decorating the common space outside their homes as well.

Facebook user Ryan Ng posted a photo of what he saw while visiting his friend at that particular block.

He wrote in his post, "I must say they know how to fully make use of the space".

In the photo that has since garnered over 800 shares and close to 500 reactions, the residents have put patio-style and garden furniture and furnishings outside their homes.

Everything is neatly placed and doesn't appear to be obstructing anyone or anything.

When Stomp reached out to Ryan, he declined to reveal the exact address as he does not want to "sabo" the residents.

Ryan, who is the founder of @sg_instamommies, a motivational Instagram page and community for young mothers, told Stomp that he had positive thoughts on what the residents had done.

"The whole level is like that, including my friend's side," he laughed.

"They live harmoniously as neighbours and added greenery and innovation into the originally concrete and mundane corridors."

Most netizens agree with Ryan and have praised the residents' decorations.

Others are concerned that it might be against HDB regulations.

According to HDB, residents should ensure that lift lobbies and fire-escape paths are clear of obstructions. They should also ensure potted plants are not placed along scupper drains.

Related Stories
You can donate food to fridges for the needy at Block 442 in Tampines: Stomp did!
Kind-hearted Yishun residents strive to #MakeYishunGreatAgai​n by giving out care packages
"If it's within my means, I will help as much as I can": Recipient of Good Neighbour Award
More About:
neighbours
creative
interesting
cool
kampung spirit