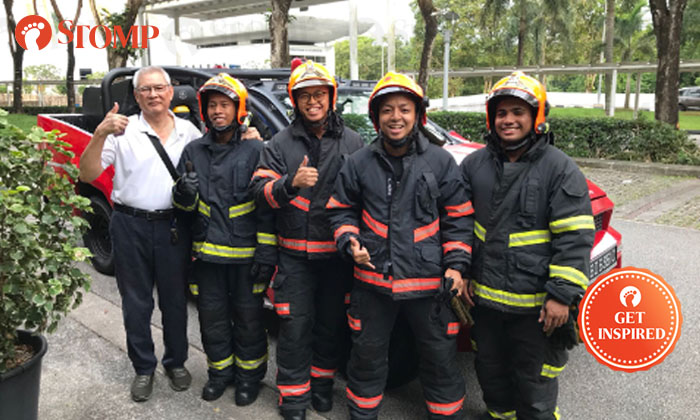 Stomper Leonard has written in to Stomp to express his gratitude towards a group of Singapore Civil Defence Force (SCDF) personnel who rescued his uncle who was stuck in a lift at Mandai Crematorium and Columbarium.

The incident happened after Leonard and his family were done visiting his father's niche at about 5.30pm on National Day (Aug 9).

He said: "After we all paid our respects, my uncle (the man in the white shirt) entered the lift with several other people to take it to the ground floor.

"Unfortunately, the lift broke down. We were rather worried for my uncle but we managed to get the staff on duty to help, and they called 995 for assistance.

"Within 20 minutes, the SCDF heroes arrived, and within five minutes, they rescued my uncle as well as the rest of the people who were also trapped in the lift."

Leonard added that he was grateful that the "SCDF were still helping people on a public holiday".

"We are all grateful for the assistance of the SCDF heroes so we took photos with them," he said.

"Once again, on behalf of all my family members, I want to sincerely thank these SCDF heroes."

In response to a Stomp query, the SCDF said that it had responded to an incident at 300 Mandai Road at about 5.35pm.

The nine people who were trapped in the lift were rescued by the SCDF using hydraulic rescue tools.

Related Stories
So sweet! 'Uncle Philip' from NTU's KFC gives lovely handwritten note to students with every order
Woman looking for 3 'angels' who responded to her dad's call for help after he felt breathless while driving
Cleaning personnel go extra mile to help disabled uncle clean motorised vehicle at The Centrepoint
More About:
inspiring
kind
scdf