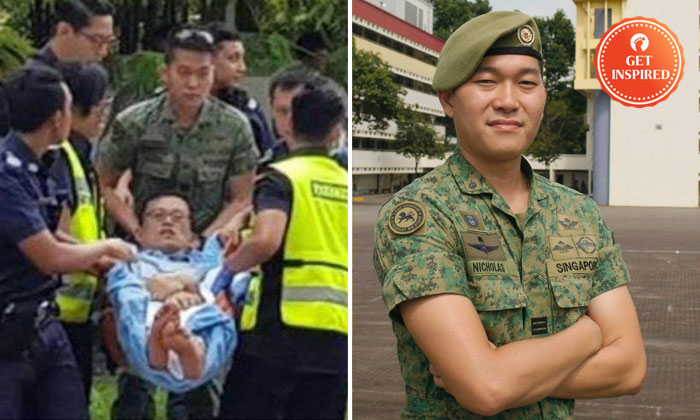 Several passersby stopped to help a 44-year-old man who was attacked by a wild boar at 25 Hillview Avenue on Oct 19 at around 8.43am. Among them was army Captain Nicholas Aw Zhong Wen.

According to a Facebook post by The Singapore Army, Captain Aw, who serves in the 9th Battalion, Singapore Infantry Regiment, was driving to camp when he noticed that the victim was writhing in pain on the pavement.

After parking his car, the soldier took his first-aid kit and rushed to see how he could help.

Upon arrival, he noticed that Stomper Raymond was already at the scene bandaging the victim's leg.

Captain Aw assisted by adding additional bandage to the man’s wound and helped one of the paramedics to carry the victim to the ambulance.

His actions have earned the praise of both the army as well as netizens. Many took to Facebook to commend him for his kind act.

In an earlier Stomp article, it was reported that Stomper Raymond witnessed the boar attack as he was driving along Hillview Avenue.

The Stomper, who works for the Ministry of Defence, told Stomp that the victim had a huge, deep gash on his left thigh.

Raymond subsequently patched up the man's wound with a first-aid kit from his car before the arrival of Captain Aw and paramedics.

Kudos to all who rendered assistance to the victim!

Related Stories
Wild boar that attacked man at 25 Hillview Ave dies after getting hit by bus
Wild boar killed, 3 people sent to hospital after 3-vehicle accident along Lentor Avenue
Crocodile gets run over by truck in Brunei -- as it was eating wild boar
More About:
get inspired
wild boars
SAF
Army