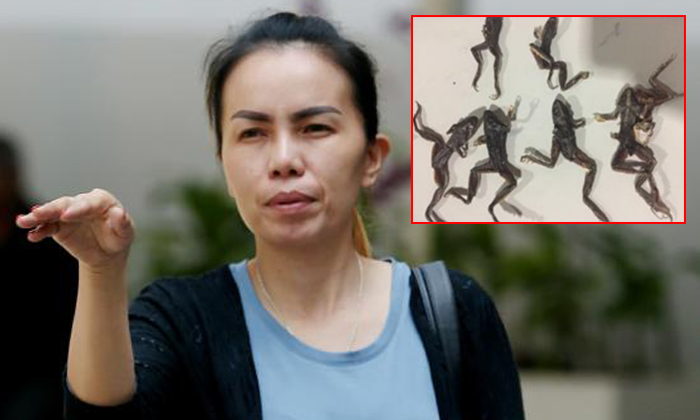 Junsricha Kanokporn, 39, was fined $10,000 in court yesterday (Dec 20) for the illegal import of dried frogs for sale in Singapore.

On Dec 9 this year, officers from the Immigration and Checkpoints Authority (ICA) alerted the Agri-Food & Veterinary Authority (AVA) to the detection of illegal food products in a Thai-registered truck at Woodlands Checkpoint.

A total of 10kg of dried frogs were found in the truck, which also carried two Thai men including the driver.

Investigations showed that the accused had been planning to sell the dried frogs in Singapore, said AVA in a media release.

The products were seized and will be destroyed

According to The Straits Times, Junsricha, who was unrepresented, pleaded for leniency in court and told the judge: "I need to come to Singapore to carry out a business to support my family. I will get a licence from AVA in the future."

This is not Junsricha's first brush with the law in Singapore.

Earlier in August 2017, she was separately fined $10,000 for the illegal import of meat products and fresh duck eggs. The imports were from Thailand.

Related Stories
4 weeks' jail for man found with illegal wildlife -- after he was unable to pay $6,600 fine
Man did not pay fine for possession and keeping of illegal wildlife, gets jailed instead
Man who sold illegal wildlife and transported them in plastic containers fined $6,600
More About:
AVA
illegal
smuggling