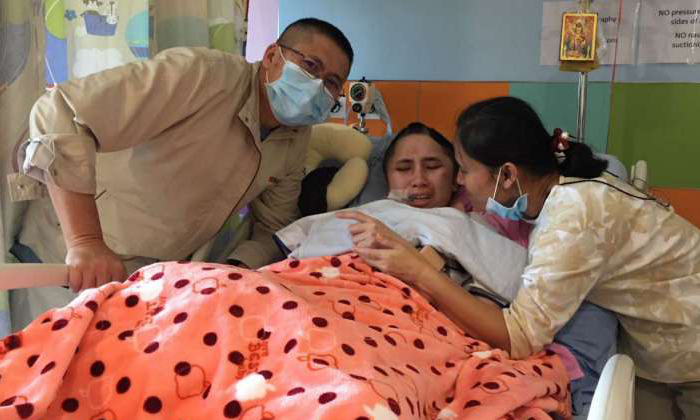 "I want to go home." Those were the first words whispered by Thai teenager Aroonrak Jattanathammajit who was left in a coma after she was hit by a car along Balestier Road in September.

Aroonrak, 16, first opened her eyes on Sunday (Oct 9) evening after being warded for nearly a month at the KK Women's and Children's Hospital (KKH).

Her father, who was by her side when she first came around, said through a translator on Thursday (Oct 13): "She was looking at the drip next to the bed, eyes wide."

Mr Sarayuth Jattanathammajit,49, added: "Now, I am relieved. I am happy she can open (her) eyes."

Aroonrak, a San Yu Adventist School Secondary 2 student, was hit by a car after leaving her hostel in Balestier Road in Sept 18. She had been on her way to school for a programme involving needy Moulmein residents.

After she was hit, the teen was taken to KKH where she underwent two brain operations. She spent 10 days in the Intensive Care Unit and a day in the High Dependency Ward before being moved to a normal ward.

Her parents have been staying by her bedside every day and when Aroonrak came around on Sunday, it was a huge relief for them, so much so that both of them finally left the ward for a meal with each other.

"Usually we will take turns (to get food)," said Mr Jattanathammajit. For instance, he would get food and buy back for his wife and they would eat by their daughter's bed, so that either parent would always be with Aroonrak, their only child.

"We don't leave the bed. But the day after (she woke up on Sunday), I was relieved and we went down to eat."

Mr Jattanathammajit only had $500 with him when he first arrived in Singapore after the accident. He had borrowed about 12 million Thai baht from the bank to fund his family's rubber business, which was not doing well, and used part of the money to send his daughter to Singapore to study.

After reading reports about the teenager's plight in early October, Singaporean Dennis Yeo,44, started an online crowdfunding drive to help Aroonrak and her family.

In less than two weeks, more than $118,000 has been raised on fund-raising website Give.asia.

Mr Yeo, who works in a non-profit organisation, said that he wanted to help ease the burden of Aroonrak's medical bills. He and Aroonrak's parents have settled the outstanding bills, which amounted to about $57,000.

Earlier, an insurance claim covered about $20,000 and some well-wishers helped with close to $5,000 in bills.

The family has been overwhelmed by the help it has received. "I never thought so many people would come forward to help," Mr Jattanathammajit said tearfully.

Mr Yeo, who had not expected to raise so much, said: "The most I was expecting was over $30,000 or $40,000. I never thought that it would go up so much. It was like monitoring the stock market every day."

"It actually shows that Singaporeans are compassionate people and they are quite generous," Mr Yeo added.

He intends to keep the campaign going until Sunday (Oct 16) and hand over the remaining funds raised to the family after that.

Mr Jattanathammajit profusely thanked Mr Yeo when the two met at the hospital on Thursday. "We cannot communicate verbally, but we have a common understanding that what we are doing is for the sake of his daughter," said Mr Yeo.

For Aroonrak, there is still a long road to recovery. Though her hospital bills thus far have been settled, she is expected to go for surgery on her skull in about a month's time.