Thai student hit by car flies home after three months at KKH: She can now walk and speak again 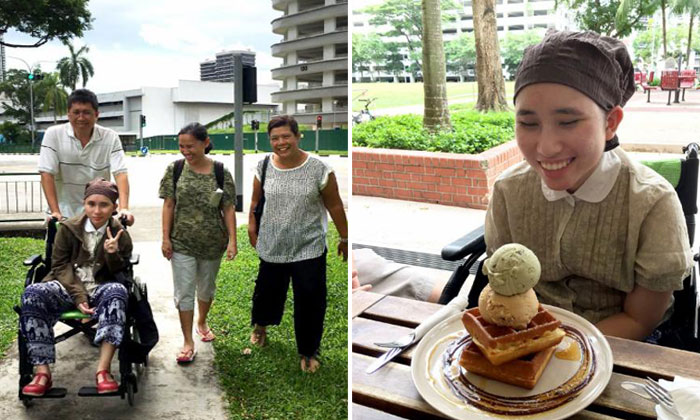 Her skull was fractured and her brain injured after a car hit her on Sept 18.

Doctors said about one in five patients with such injuries do not survive. Those who do usually end up severely disabled.

Despite these odds, San Yu Adventist School student Aroonrak Jattanathammajit, 16, not only survived - she can now walk with some assistance, and has regained her ability to speak.

He added that her recovery was "remarkable" compared to many other patients with similar injuries.

Dr Low, who heads KKH's neurological service, said: "In general, many patients who sustain such severe head injuries do not have such good outcomes.

"Typically, their injuries result in quite severe a disability and can impact their abilities to eat, speak, or walk normally. They may even become wheelchair-bound or bed-bound."

He attributed Aroonrak's recovery to several factors, including her determination and perseverance.

"She also received strong support from her family and friends, as well as the timely provision of multi-disciplinary holistic care," he said.

Aroonrak﻿ was crossing Balestier Road when a car hit her. The case is still under investigation.

The teenager, who came to Singapore last year, had to go through two brain operations to save her life.

On Nov 14, she had a third operation, which lasted five hours, where doctors replaced a portion of her skull with an artificial one.

The parts of her brain that were damaged govern balance, memory and mood.

After almost three months in hospital, Aroonrak was finally discharged.

She flew home to Thailand with her parents on a Singapore Airlines flight at 4pm yesterday.

An ambulance, which was waiting for her at Bangkok's Suvarnabhumi Airport, rushed her to Ramathibody Hospital, about an hour's drive away.

Her father, Mr Sarayuth Jattanathammajit, 49, told TNP that doctors now will focus on treating her brain injuries and problems with her eyesight.

Even though his daughter's injuries were life-threatening, Mr Sarayuth, who runs a rubber retail business, said he is willing to forgive the driver who had hit her.

He said: "I just want to move on. But I do not want to see the driver as I fear I may become emotional once again."

Aroonrak shared the same sentiment, saying: "I will definitely return to Singapore when I am better to visit all those who have helped me."