Thai man looks like K-pop star after plastic surgery, even his mum can't recognise him 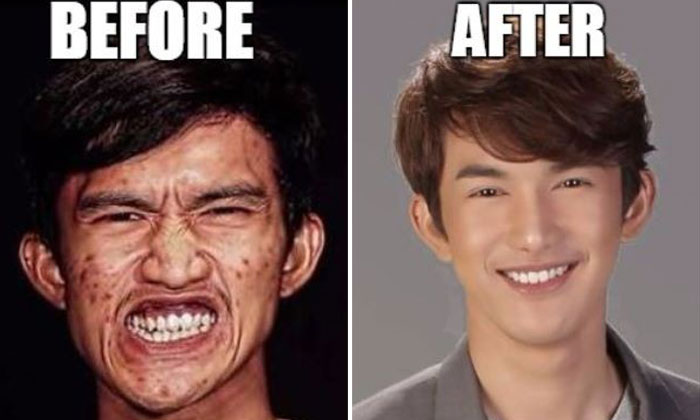 A factory worker in Thailand went through such a shocking transformation that even his own mother could not recognise him.

Noppajit Monlin, who suffered from a crooked jaw, was featured in a TV series called Let Me in Thailand.

It is the Thai edition of the popular South Korean reality TV show.

The 22-year-old wanted to undergo plastic surgery because his crooked jaw prevented him from chewing properly.

His jaw made him self-conscious and embarrassed by his appearance which led him to live a life of isolation where he would go for lunch breaks by himself, reports The Star's Malay-language portal mStar.

In the programme, Noppajit was selected to travel to South Korea to undergo cosmetic surgery where he fixed his jaw, forehead and eyelids.

His saliva glands were injected with botox to correct excessive salivation and he also underwent treatment to clear up his skin.

After three months of recovery, he met his mother for the first time since his transformation.

She could not even recognise him.

When he stood up and walked towards her and introduced himself as the "new Noppajit", she burst into tears.

"Is that you? Is that really you?" his mother said.

Noppajit told the show that his social life has changed drastically now that he looks like a "K-pop star".

However, he said that he is still the same person on the inside and that his heart remains loyal to his transgender girlfriend, Tob, whom he met on Facebook.

They have been together for three years.

"Although I have a new life now, my heart remains the same."

Related Stories
Some of these celebs actually looked better before plastic surgery
Did Jun Ji-hyun get plastic surgery? Here are some "obvious" signs
Living Barbie dolls are real -- and they walk among us
More About:
plastic surgery
transformation