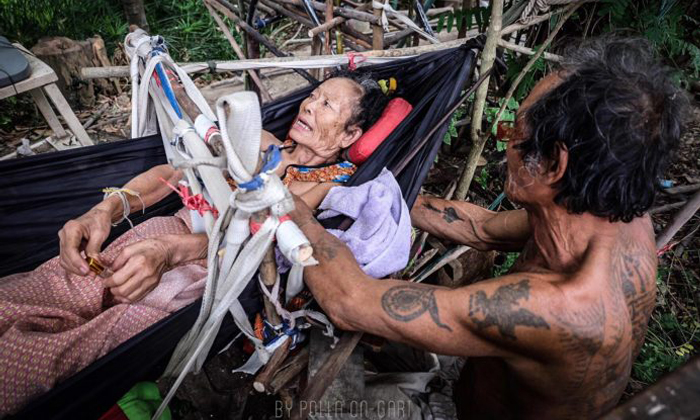 "In sickness and in health, until death do us part."

Many take these words at face value when wedding vows are exchanged, but that is not the case for this Thai man, whose selfless love for his wife has touched many hearts.

According to Kwong Wah Yit Poh, the man’s wife was bitten by a snake last year, which resulted in atrophy of her limb muscles and rendered her immobile

Ever since then, her husband has stayed by her side to care for her at their small home in Sa Kaeo province, in eastern Thailand.

“We previously vowed to walk this life together. My wife is the most important person in my life, and I will never abandon her,” said the man.

As he is unable to leave the house to work in order to care for his wife, the couple get by on 700 baht (S$28.40) in aid money and food donations from neighbours every month.

Concerned that his wife will go hungry, the man always makes sure to feed her first, before he eats whatever is left over. As a result, he has not had a proper meal in a long time.

However, the man says it is a sacrifice he is willing to make.

He said: “I may not have a beautiful house or car, but I have dedicated my heart and soul to my wife, and will never go back on my word.”

Many netizens have reached out to raise funds and offer assistance to the man after the couple’s plight was first brought to light in a post by Facebook user Worranan Sarasalin on Feb 5, which has since been removed.

Already, at least two Facebook users have posted photographs of volunteers bringing aid to the couple at their home. A fundraising campaign for the couple is also underway.

The man said:“I believe my wife’s body will slowly recover. In life, you must always have hope.”