Terengganu crash: Devastated teacher yet to inform his other children of tragedy 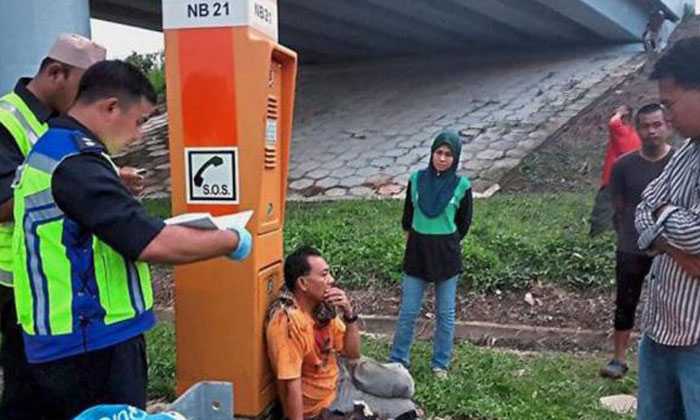 Blood trickling down his face, Ahmad Nasal Abd Rahman (pic) shouted "Allahu Akbar" as he brought himself to the motionless bodies in his car, calling their names in the fervent hope of waking each of them up.

He found his wife still breathing. He held her in his arms, apologising and pleading with her to forgive him.

"I told her I am sorry and it wasn't my fault."

"The tyre burst and I was not able to control the steering. She nodded her head repeatedly.

"I took it as a sign that she understood what I said and had forgiven me," said Ahmad Nasal, 52, tears welling up in his eyes.

The teacher was behind the wheel of an MPV carrying his family members and relatives from Pahang - where they had attended an aqiqah ceremony in Felda Jengka - to Terengganu for a holiday.

A burst tyre rendered his car uncontrollable, and it swayed and spun before crashing into a divider and ramming a pillar.

His three other children - Quratul Ain, 14, Ahmad Shakir, 12, and Ahmad Mukriz, three - were badly injured and sent to the Ke­­maman Hospital for treatment.

Ahmad Nasal suffered minor injuries. They were all later transferred to the Sultanah Nur Zahirah Hospital.

Recounting the painful ordeal to The Star at the hospital, a traumatised Ahmad Nasal said all he could see were faces of his dead family members each time he closed his eyes.

"I wish I could go back in time. This is an episode I will never be able to forget," he said.

Ahmad Nasal paused after each sentence, his weary eyes scanning the ward corridor before he could summon up his next thought.

He said everything happened very quickly.

"I only heard the loud sound of a burst tyre, and then, the car swayed and spun, hit a divider and rammed into the pillar of an overhead bridge.

Ahmad Nasal, who hails from Kodiang, Kedah, said he would pull himself together and find the best way and time to inform his other children of the death of their mo­ther and siblings.

"They still do not know about the deaths."

"They have asked about their whereabouts but all I told them was their mother and two siblings were still at the Kemaman Hospital."

"We have also informed other relatives and the nurses to keep this a secret."

"It is going to be difficult but we all have to be prepared for the worst and at the same time, move forward."

"Things are not going to be easy for us and I will now give them the love of a father and a mother," he said.

Ahmad Nasal has not been able to read or watch any news about the tragedy, and hoped the family's decision of not wishing to be disturbed would be respected.

Meanwhile, Mahani's brother-in-law Mohd Aziruddin Majid said the question of forgiving Ahmad Nasal or not did not arise at all as it was not his fault.

"We don't blame him for what happened and will always be with him and the children until the end. They are part of our family and it will remain as such till the end."

"What happened was not something that Ahmad Nasal wished or planned for."

"It was fate and it could happen to any driver," the emplo­yee of Ko­­lej Al-Quran Terengganu in Padang Midin here said.

Mohd Aziruddin added that this was not the time to blame anyone and everyone should be united instead to provide strength and assistance to the family, as well as moral support for the children.

"What happened was not Ahmad Nasal's fault and the family stands together with him."

"It is fate and we accept God's decision," the officer with the Veterinary Department in Kuala Terengganu said.