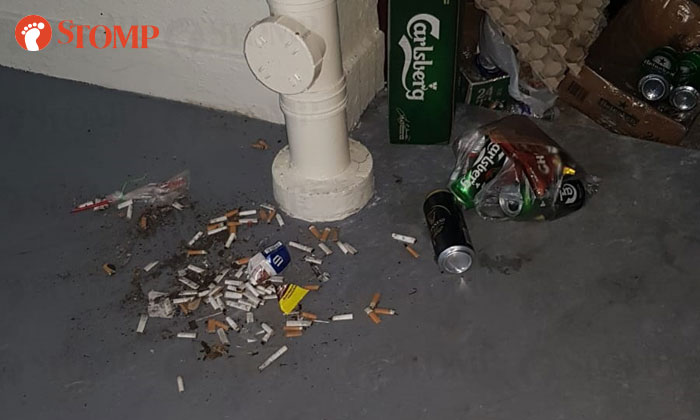 A Stomper is frustrated with residents and passers-by who repeatedly litter and dirty the void deck at Block 42 Telok Blangah Rise.

She shared with Stomp photos she took on Sunday night (Dec 9) showing clusters of cigarette butts and discarded beer cans.

She told Stomp she believes that some of the people who leave a mess are residents at the block while others are just visiting.

Apart from being an eyesore, the Stomper commented at how unhygienic and smelly the void deck can be.

"The ashes really stink when they get wet," she said.

"Also, when people drink under the block, they will just go to the corner to urinate near the discarded beer cans.

The Stomper added that it's a shame the floor of the void deck was given a fresh coat of paint just over a month ago but has already become stained because of the litterbugs.

"Now, it looks like it hasn't been cleaned in forever."

She told Stomp that people like to hang out at the void deck especially because there is a provision shop nearby.

"That's fine but it's about being considerate to other residents," she said.

The Stomper said that she has lived at Block 42 since 2006 but noticed the area has had a serious litter problem starting from about six to seven years ago.

"It's unhygienic, inconsiderate and not to mention, illegal," she said.

"If you lived here you would be frustrated too.

"I hope by sharing this with Stomp, something can be done.