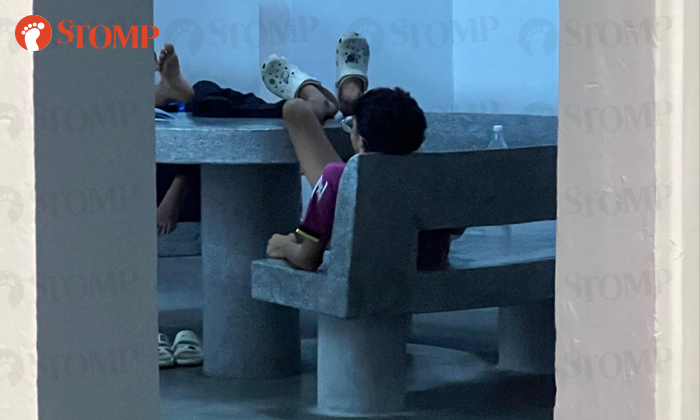 Wanting to feel at home does not mean you should really behave like you are at home.

Stomper Anonymous was irked to see two teenagers hanging out at a void deck in Ang Mo Kio with their feet propped up on a table for public use.

Anonymous, a resident in the area, said: "I was walking back home after getting some groceries when I came across these two teenagers playing games on their phones while having their legs up on the table.

"I understand that teenagers always have a very calm mentality but to put their legs on a table where people actually put their food on and eat is just disgusting.

Anonymous also noted that one of the teens had his bare feet up on the table, while the other still had his shoes on.

According to her, the pair were at the void deck for at least 20 minutes.

She added: "The purpose of this post is not to shame the teens. I would just like to sincerely request everyone to be mindful of what they do in public places.

"Some people spend more time here or need the table more than the rest of us. So let's be good souls and not do this kind of disgusting things, please."