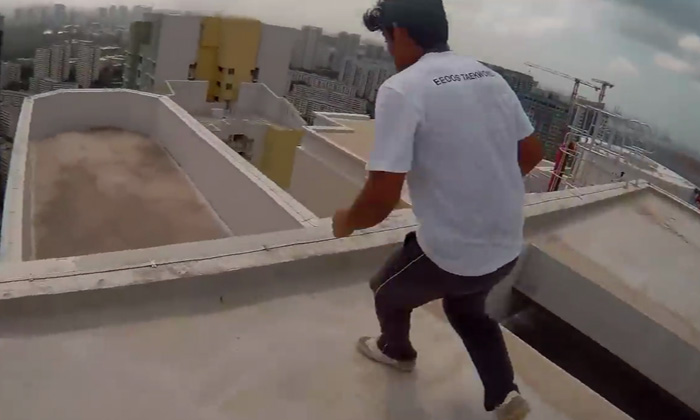 A police report was lodged after a group of teenagers uploaded a video of themselves performing parkour stunts on the roof of a 40-storey Housing and Development Board (HDB) block in Clementi.

In a two-minute-29-second video that was posted on YouTube on Jun 23, three teenagers are seen climbing ladders and scaling pipes on the rooftop of the building.

One of them is then seen scaling a ledge before jumping onto a platform across.

According to Lianhe Wanbao, the stunts were conducted at one of the blocks between 312A and 312C in Clementi Avenue 4.

A reporter that had visited the scene found that staircases to the rooftop were locked, accompanied with signs stating that only authorised staff members are allowed to enter.

A spokesman for the Holland-Bukit Panjang Town Council said that a police report has been filed, reports The Straits Times.

He added that the videos were apparently filmed at least a year ago, before residents started moving into the estate in Sept 2016.

"We believe that the video was taken some time back, in the period whereby the building was still in construction and before residents moved in," said the spokesman.

Last year, a police report was made following a video depicting several men performing dangerous stunts on top of the Esplanade's outdoor theatre.

Another similar report was also lodged in Sep last year, after a parkour enthusiast filmed and posted a video of himself and his friends scaling the glass roof of Eastpoint Mall.