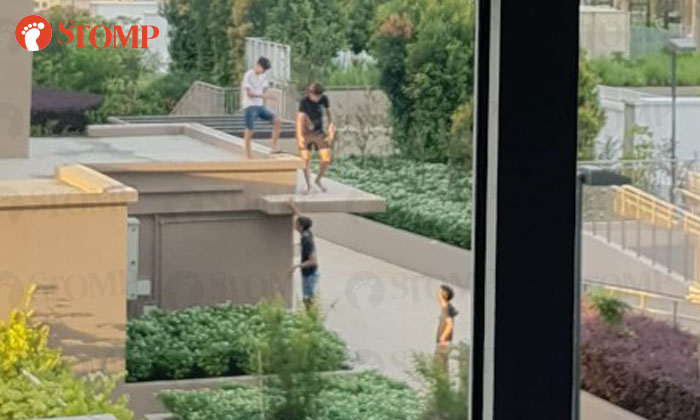 A group of teenage boys were seen scaling a roof and ledge at an outdoor garden at Block 187 Bedok North Street 4 on Jan 4.

Stomper Simon, a resident of a nearby block, was relaxing in the living room of his flat at about 6pm, when he looked out the window overlooking the garden.

He told Stomp: "I saw the boys standing around, joking with each other.

"Then, one of the boys leapt and scaled the roof of a small block in the garden.

"Another boy followed in his footsteps and climbed it too."

The Stomper grabbed his mobile phone and snapped pictures of them.

In the pictures, the two boys can be seen hanging off the roof of the block and standing on a ledge connected to the block, while the rest watch from afar.

Simon said: "The boys were monkeying around, treating the area as their own playground.

"They are too old to use the conventional playground for kids, so they resorted to creating one of their own.

"Perhaps they had additional energy they had to use up.

"I hope this is the last time I see this happen outside my window."

The Stomper added that he has seen incidents like this one on social media, where young adults scale roofs of dangerous places illegally.

Stomp has previously published several stories where youths were seen climbing up the roofs of sheltered walkways or buildings.

In an article published yesterday (Jan 7), two children ran across the roof of a sheltered walkway in Jurong West after they realised they were being filmed.