Teens live life on the edge at Riversound Residence -- literally 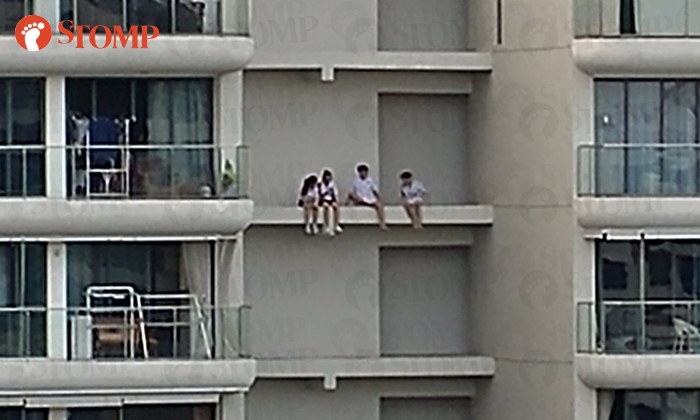 Stomper W spotted a group of five students on a high ledge at Riversound Residence Block 9, a condominium building in Sengkang East.

He filmed a video of the incident, which occurred yesterday (Aug 21) at around 4.49pm.

In the video, the teenagers can be seen sitting on the third highest ledge of the building, with their legs dangling over the edge.

They subsequently started to get up one by one, walk across the ledge, before leaving through an exit.

"Mischievous acts like this one can cost someone else’s life to end early.

"Often, we hear news reports about construction workers who were spotted working without a safety harness.

"A red flag will be triggered whenever there is a casualty, especially there is death.

"Yesterday, I witnessed a group of five students sitting on the edge of the ledge.

"The five children, believed to be in lower secondary school, were seeking one hell of an adventure experiencing life on the edge at Block 9, Riversound Residence. Literally.

"I hope the respective school principal, teachers, schoolmates, classmates, parents, friends and neighbours are able to point out the danger and educate kids, preventing them from performing such dangerous acts.

"I also hope through the media's help and through proper communication channels, awareness can be raised to all parents so that they can guide their children. Engaging these kids without reprimanding them can be useful.

"My concern is, what if one kid in that group does it again? By raising awareness, would this prevent someone else's kid from participating in similar mischievous acts next time?