Teen who fell to death while on drug charge: CNB to review circumstances of his arrest 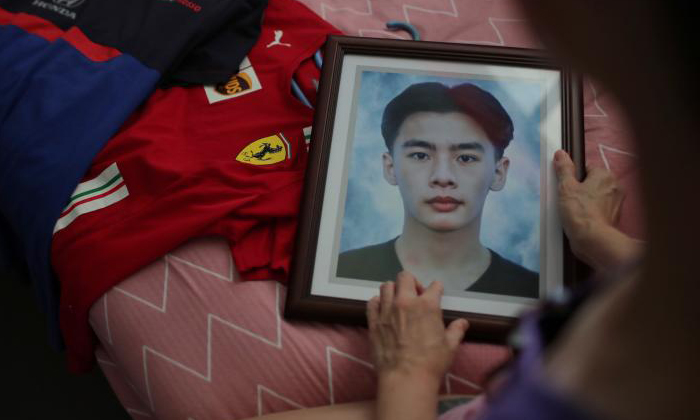 A review of the circumstances of the arrest of a teen is under way following the death of the 17-year-old, who had been on a drug trafficking charge.

Justin Lee, who was arrested by Central Narcotics Bureau (CNB) officers on Feb 3 and charged in court on June 24, died on Sept 16 from a fall from height.

His mother, Ms Cecilia Ow, 51, on Tuesday (Oct 12) posted a letter addressed to Minister for Law and Home Affairs K. Shanmugam on her Instagram page, describing her son's arrest and his history with depression.

The CNB said on its Facebook page on Wednesday: "Some statements have been made publicly about how Justin was arrested and questioned. CNB has been investigating the circumstances of his arrest."

The bureau added that the investigations are expected to be completed before the end of the month, and the Ministry of Home Affairs (MHA) will make the findings public. "The allegations are being fully investigated," it said, adding that MHA will also take further steps if necessary.

CNB said it arrested Justin after it conducted investigations into a person who was suspected of trafficking a Class A controlled drug online. Drugs in this category include heroin and LSD.

Outlining some of the details of her son's arrest on Feb 3, Ms Ow, a senior lecturer at a polytechnic, told The Straits Times on Wednesday she was not able to speak to her son, even while officers searched his room with him at their home in Hougang. She spoke to him only when she bailed him out on the night of Feb 4.

Justin had withdrawn from a cyber security course at Nanyang Polytechnic so he could retake O-level biology and try to get into university to pursue pharmacology, said Ms Ow, who is divorced.

In her letter to Mr Shanmugam on Oct 1, she referenced the case of Benjamin Lim, 14, whose death was ruled a suicide after he was found dead at the foot of his block in Yishun in January 2016.

He had been questioned at Ang Mo Kio police division hours earlier for the alleged molestation of an 11-year-old girl in a lift.

While she said she does not deny that Justin committed an offence, she said the way he was dealt with needed to change.

She called for a separate unit within the police force with training in handling young people with mental health issues to be formed to deal with offenders under the age of 18.

Ms Ow said CNB officials contacted her on Sept 20 after she made several calls to the bureau.

The CNB said on Wednesday that senior officials have been speaking to Ms Ow since Sept 20, when they heard of her son's death, and last met her on Oct 8. "CNB assured her that there would be full investigations and provided her with the timeframe required for the investigations. She was also told that the findings will be shared with her," it said in its post.

It added that Mr Shanmugam contacted Ms Ow the same day she sent her letter to assure her a thorough review into her son's arrest and investigations will be conducted. She was also given the contact details of Mr Shanmugam and Minister of State for Home Affairs Muhammad Faishal Ibrahim, and told that she could contact the ministers at any time, said CNB.

It also said it arranged for psychological support to be provided to her. Ms Ow told ST she declined the offer.

"CNB understands Justin's mother's grief and will continue to render assistance to her," the bureau said.