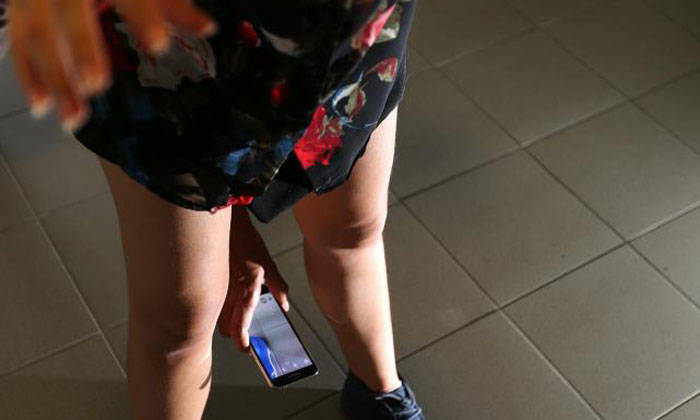 Shaffiq Alkhatib
The Straits Times
May 8, 2019

A student recorded upskirt videos of at least two teachers in his school after the women came to his desk when he asked for their help with assignments.

He also recorded a video of his sister's friend while she was taking a shower in his Sengkang flat.

Now 17 years old and awaiting national service enlistment, he pleaded guilty in court on Wednesday (May 8) to three counts of insulting a woman's modesty as well as one count each of criminal intimidation and being in possession of obscene videos. Eight other charges for similar offences will be considered during sentencing.

He cannot be named due to a gag order to protect his victims' identities.

The court heard that on Feb 12 and 22 last year, the boy placed his mobile phone - with the camera lens facing upwards - on top of his bag which was on the floor in his classroom.

During mathematics lessons on those two days, he asked for his teacher's help and recorded four upskirt videos of the 47-year-old woman.

Using a similar method the following month, he recorded four upskirt videos of his Chinese language teacher, also 47 years old, in the school in the eastern part of Singapore.

District Judge Eddy Tham said the teenager's acts were "very disturbing" and that teachers should be able to carry out their duties without falling victim to such offences.

Deputy Public Prosecutor Genevieve Pang told the court that the boy also used his phone to record a video of his sister's friend while she was taking a shower in his home on Aug 10 last year.

He was caught 15 days later after police officers spotted him with a group of youngsters behaving suspiciously at the void deck of a Sengkang block of flats at around 4.30am.

The officers conducted a search and arrested him when they found obscene materials, including the teachers' upskirt videos, on his mobile phone.

The court heard that the boy's crime spree started on March 20, 2017, when he uploaded onto Instagram photographs of a 15-year-old student clad in undergarments. He threatened to post the photos on the Internet if she did not send him her nude pictures.

The girl told her school's disciplinary master about the matter and he alerted the police three days later. Court documents did not state what happened after that.