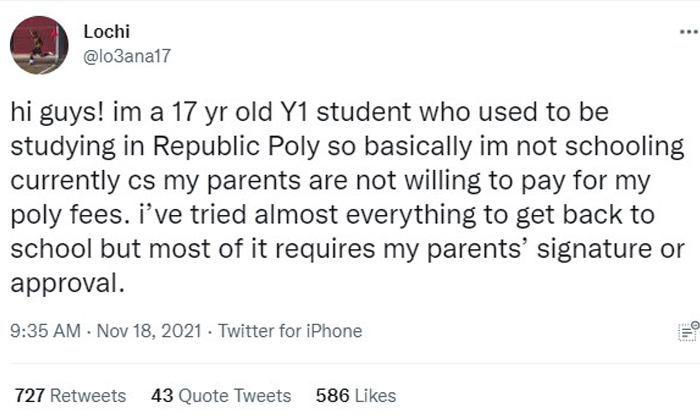 A 17-year-old teenager has turned to crowdfunding to raise money for school fees, which his parents had apparently refused to pay because they felt that 'polytechnic has no future'.

The former Republic Polytechnic student had shared his plight in a series of tweets on November 18.

Twitter user @lo3ana17 wrote, "...so basically im not schooling currently (because) my parents are not willing to pay for my poly fees. I've tried almost everything to get back to school but most of it requires my parents’ signature or approval."

Appealing for funds, the Singapore permanent resident said that he needed up to save up around $6,200 for an academic year and that "any amount is ok."

He also acknowledged that while it was "really embarrassing" for him to be making things public, he needed help.

"The reason why my parents are against me (going) to poly is because they have the old generation mentality where they always say poly has no future," the teenager added.

He had been pursuing a diploma related to the infocomm and security sector after enrollment in April 2021. However, he had only completed the first semester in his first year before his parents stopped paying his course fees.

His parents had wanted him to take the A-Levels as a private student or in an international school, said the teenager, adding: "Then after that, my mum was like 'oh if you pay his poly fees I'm going back to Sri Lanka.'"

Not wanting the family to split up, his father agreed to stop paying the course fees.

The teenager is currently working part-time as a Safe Distancing Ambassador at a hospital to save up for school, reported AsiaOne.

Netizens have responded to his tweets with advice and suggestions on what to do.

In a tweet on Saturday (Nov 20), the teenager wrote: "I have about $490 from all of you amazing people and I want to thank each and every one of you."

He also said: "The fees are still not enough but I still believe!

In another update on Tuesday morning, the teenager said he currently has $1,960 in donations and expressed his gratitude towards everyone who chipped in.

"Without your help, I wouldn’t be where I currently am at," he added.

The teenager has also reached out to several MPs and his polytechnic about his situation.

In response to AsiaOne's queries, a spokesperson from the polytechnic said: "The polytechnic is in touch with the ex-student to render assistance."

hi guys! im a 17 yr old Y1 student who used to be studying in Republic Poly so basically im not schooling currently cs my parents are not willing to pay for my poly fees. i’ve tried almost everything to get back to school but most of it requires my parents’ signature or approval.