Teen flips tray at Sengkang food stall vendor, who beats him with ladle 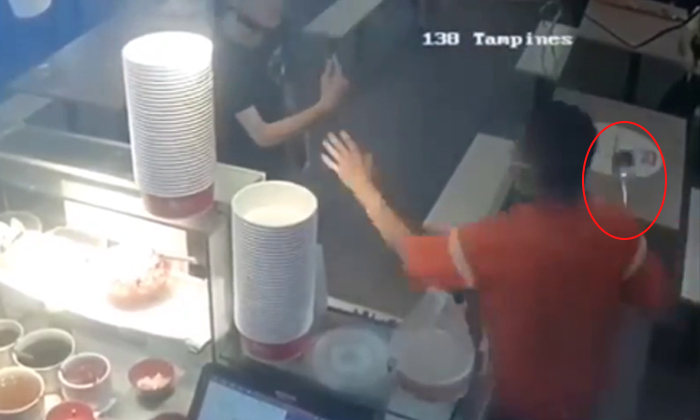 A fight broke out between a customer and a food stall vendor at a coffee shop in Sengkang on Sunday (Apr 24).

In response to a Stomp query, the police said they were alerted to a case of voluntarily causing hurt at Block 455 Sengkang West Avenue at around 5.50pm.

A 17-year-old teenager was conscious when taken to hospital and a 51-year-old man is assisting with police investigations.

A video of the altercation was posted on Facebook with the caption: "Young diner fighting with noodle stall hawker."

The pair are seen in a dispute that gets increasingly heated and things escalate when the diner flips a food tray at the hawker.

The hawker is then seen coming out from behind his stall counter and repeatedly hitting the diner with a ladle.

The same video subsequently shows a woman, presumed to be the diner's mother, shouting at the hawker at the coffee shop.

Many netizens slammed the diner for dealing the first blow and the woman's bad behaviour. However, one pointed out that the hawker should not have retaliated.

Another netizen commented: "Don't hurt others to get hurt yourself."