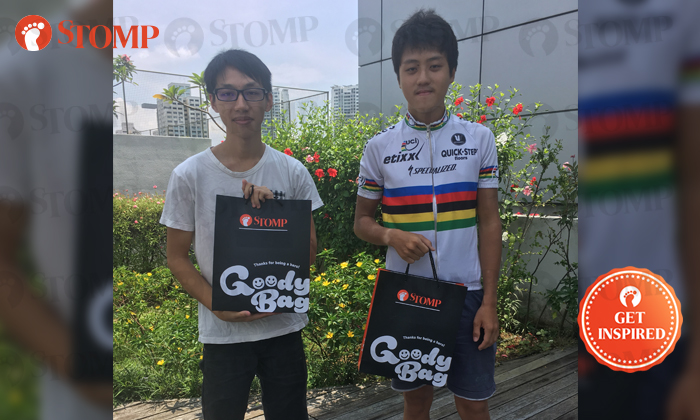 When 19-year-old Kwek Jun Yuan and 18-year-old Ray Ang walked a lost uncle back home from Yishun Dam, they did it not for fame or to earn praise.

Rather, it was simply something that they felt had to be done.

Ray, a sports science student, told Stomp in an interview: "It's not about being kind, it's not about inspiring people."

The two Republic Polytechnic (RP) students made headlines earlier last month for walking one hour and 45 minutes with a karung guni uncle from the dam and back to his house at Yishun Ring Road on Feb 28.

The distance they covered? 4.44km, according to Ray's sports app.

"It's not very auspicious, I know, but yeah, it's what the app says," laughed Ray.

Jun Yuan, who is an engineering student, shared how he and his friend pushed three bicycles -- their own plus the uncle's cardboard-loaded one -- along during the walk.

The uncle's bicycle also had a "big red bag of cardboard" on its handlebar, which Ray helped to carry for part of the journey, even though it made him "quite sore".

And when Ray posted about the heartwarming encounter on the Love Cycling SG (LCSG) Facebook group, it was not for bragging rights, but to change the negative perception that some people have against cyclists.

"This group is basically my home for when I'm off the road.

"Cycling for me is a holistic thing. It's like my entire life and naturally, I need a place to talk about cycling on social media and that's where LCSG comes in.

"Recently, LCSG has been under attack by some trolls. My posting was not to boast, but to send a message to those trolls that, 'Eventually, better people will prevail. You can't last here. there's no room for toxicity here.'"

The affable teenagers also shared how the uncle reacted to their actions that night: "He was grateful and very happy. He said, 'Luckily I met kind-hearted people like you.'"

Stomp presented Jun Yuan and Ray with Stomp Goody Bags as part of our efforts to recognise everyday heroes and highlight heartwarming deeds.