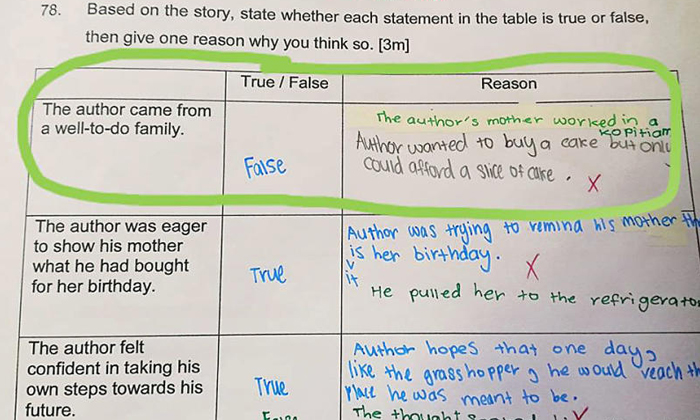 A teacher's answer to a Primary 6 English comprehension question that assumed someone who is a hawker is "not well off" has sparked accusations of social stereotyping.

In the passage, about a young boy who wanted to surprise his mother by buying her a birthday cake, the pupil was asked to answer true or false to a statement and justify her answer.

The statement was, "The author came from a well-to-do family".

The student answered false, justifying it by saying: "Author wanted to buy a cake but only could afford a slice of cake."

The teacher marked her answer as incorrect and allegedly gave the answer as "False; The author's mother worked in a kopitiam."

The question appears to be worth one mark and is said to be part of the school's continual assessment (CA) test.

The post, put up on Sunday by Ms Rainbow Lim, 24, a tuition teacher, was shared almost 4,000 times on Facebook.

In her post, Ms Lim said that her student, whose parents were hawkers, was frustrated and baffled by the school's response. She quoted her student: "My dad works at a hawker centre and we are not poor... so I didn't think that would be the answer."

Netizens who saw the post expressed outrage that a school would encourage such assumptions about social class, with many also claiming that they, too, had grown up in families of hawkers and "were not poor".

Many also said that it was "scary" to think that schools and the Ministry of Education (MOE) could permit such an attitude be taught in school.

The text in question was an extract of local writer O Thiam Chin's short story, Grasshoppers. He told The New Paper yesterday that he was surprised to see the way his work had been used and interpreted.

"This extract is only a small part of the story, and to read and study it out of context is really doing it huge injustice," he said.

"It is really limiting and demeaning if all the reader can draw from a mention of the character's line of work or working environment is that he or she is poor, which only reflects the reader's narrow, subjective perception and also meagre life experience."

Associate Professor Tan Ern Ser, a sociologist, told TNP: "Stereotypes are, by definition, simplistic and biased, with no objective basis. So it is unfair to perpetuate them."

A young hawker, who declined to be named, said hawkers can actually be well off and added that if she had been the student, she might start to feel that her parent's occupation was something to be embarrassed and ashamed of.

Local food and hawker expert K.F. Seetoh said: "Wait till they (the teacher and school) meet inspiring and determined hawkers who rake in over $100,000 a month. "

He added that in light of the Unesco nomination for hawker culture that Singapore is trying to push for, such an attitude could hurt the bid.

Mr Seetoh said: "If Unesco gets a load of this, the application may look like a farce."

MOE said it was unable to comment on the incident because it could not verify the source of the paper. However, TNP understands that the ministry advises teachers to be sensitive to issues such as race, religion and socio-economic class in setting papers.

Related Stories
Does this look like a TV or microwave to you? 'Outdated' assessment book sparks debate
Error-filled poster offering tuition gets schooled instead at Ang Mo Kio
Can you spot all the grammar mistakes on this poster for English tuition?
More About:
unusual
student
school
child