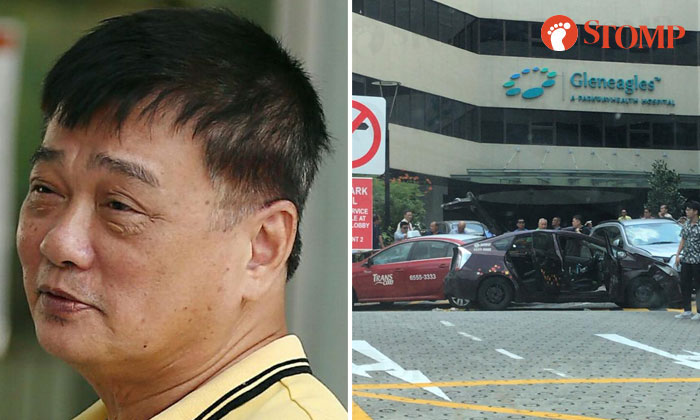 A taxi driver unintentionally stepped on the accelerator of his vehicle instead of the brake, causing a chain of events that led to the death of an elderly passenger in another taxi.

Four other victims were also injured in the incident that took place near Gleneagles Hospital in October 2018.

Ho Kee Hoe, 64, was sentenced on Wednesday (March 18) to three weeks' jail after pleading guilty to negligent driving, causing the death of Mr Suparno, 70, an Indonesian man with only one name.

Ho, a Singaporean who has since resigned as a taxi driver, was also disqualified from driving all classes of vehicles for four years.

On Oct 4, 2018, Ho stopped his taxi in the driveway of the Annex A building of Gleneagles Hospital at around 11am and alighted to help his passenger remove a wheelchair from the boot.

When the taxi inched forward, he went back to the driver's seat to step on the brake.

But he stepped on the accelerator instead, causing the taxi to surge forward and hit the rear of a nearby stationary car.

The vehicle later struck another taxi that was then going up a service road leading to the hospital.

Mr Suparno was one of the three passengers in the second taxi, the court heard. The cab driver was also injured in the accident.

This second taxi then hit a traffic marshal, 60.

The DPP said Ho's taxi continued to move forward, colliding with a car which was travelling along the service road of the hospital.

Court documents did not state when or where Ho's taxi finally stopped moving.

Mr Suparno, who had been sitting in the back seat of the second taxi, had a history of heart problems.

He suffered multiple broken ribs among other injuries in the accident.

He went into a sudden cardiac arrest and died later that day at 1.40pm.

The DPP said the four victims had injuries such as muscle sprain and back pain. Most were later given between two and seven days of medical leave.

For causing Mr Suparno's death by negligent driving, Ho could have been jailed for up to two years and fined.