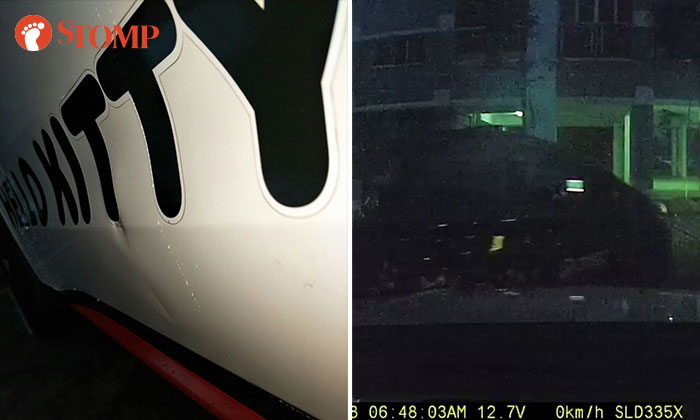 A taxi driver allegedly opened and closed his door several times, causing a dent to be formed in Stomper Sharon's car that was parked beside the taxi.

The taxi driver then left without informing the Stomper of the damage to her car.

Sharon had parked her vehicle at the open space carpark at around 3.30am when she had returned from her trip in Malaysia.

Later at 7.30am, when she went to retrieve her car, she noticed that her car was badly dented.

She then reviewed her car camera footage and shared it with Stomp.

In the footage, a SMRT Taxi can be seen reversing to park next to the Stomper's car.

Several loud bangs were then heard which sounded like a door banging against her car.

30 minutes later, the taxi then left the carpark.

Sharon told Stomp, "I was very very angry to hear a SMRT cab (driver) opening his door and banging several times against my door with huge impact."

She estimates that repairs would cost around $500.

"If it was an accident, fine. But from the video itself, it shows that it's on purpose," said Sharon.

She also said that there were so many empty lots in the carpark, however the taxi driver still chose to park next to her car.

Sharon, who also works as a tutor, said, "This really hurts. My car is a Hello Kitty car. My kids really love Hello Kitty so that's why we do up the car like that."