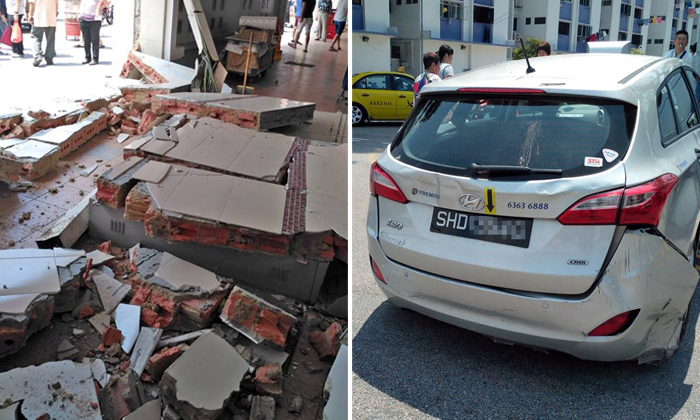 A 68-year-old driver crashed his taxi into a wall, then later hit a lamppost, at Bedok Food Centre and Market on Sunday (Aug 12).

In response to a Stomp query, the police said they were alerted to an accident involving a taxi at Block 216 Bedok North Street 1 at 11.49am.

No injuries were reported. Paramedics from the Singapore Civil Defence Force (SCDF) assessed the cabby but he did not want to be conveyed to a hospital.

The cabby, identified as Mr Zhang, said he had been dropping off a friend at the market.

Lianhe Wanbao reported that he had wanted to brake but accidentally stepped on the accelerator instead, causing the vehicle to reverse and crash into the wall.

He then stopped and changed gears to move forward. However, upon stepping on the accelerator, the taxi sped forward and collided with a lamppost.

Mr Zhang told Shin Min Daily News that the accident left his nose bleeding but he was otherwise fine.

However, he estimated having to compensate his company around $3,000 in damages.

A 76-year-old friend who has known Mr Zhang for over a decade said that the cabby, in more than 10 years of driving a taxi, was not a careless person.