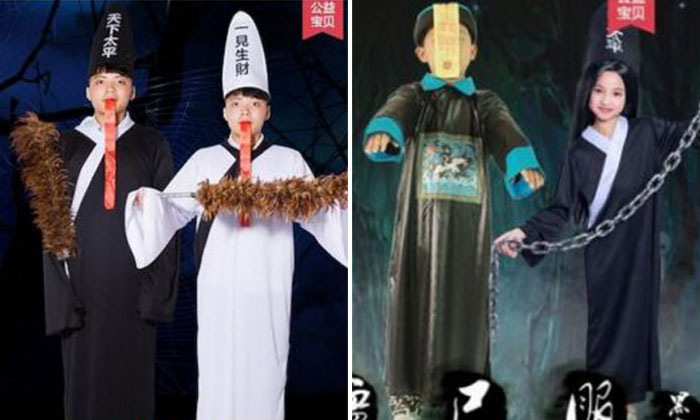 Qoo10 said on Friday (Oct 25) that the company's relevant teams "have already been notified to urgently review the items in question".

Taoist devotees recently voiced concerns about the costumes' listings, saying that they are disrespectful and inappropriate.

The costumes are based on two Chinese deities, called heibai wuchang in Chinese which are worshipped by Taoists as guards of the underworld.

There are a few listings of the costumes for adults as well as for children on Qoo10's Singapore online site. They feature long-sleeved robes in black or white and another version which includes a long red strip that resembles a tongue.

Master Lee Zhiwang, president of Singapore's Taoist Mission told The Straits Times that the Halloween costumes was a serious matter to devotees, and several had complained to the organisation in the past few days.

"We should not take this as a joke but treat (the deities) with great respect. Their portrayal in shows or in any form of media should be done in a strict and careful manner," said Master Lee.

Singapore's Taoist Federation also told Shin Min Daily News on Thursday that the deities were worshipped by people so having Halloween costumes based on them could be seen as insulting.

On Shin Min's Facebook page, a netizen said that the deities were "part of Chinese religious tradition, let us be mutually respectful".

When contacted on Friday, Qoo10 said that, to the best of its knowledge, the company had not received any complaints about the costumes on its platform.

A company spokesman said that listings on its site that were clearly illegal or not approved by government agencies would be taken down by its team and software system.

But, for cases like the Halloween costumes based on the Taoist deities which involve cultural and religious sensitivities, the spokesman said that the matter "becomes far from straightforward".

"It is not for us as the platform to govern with a heavy hand what can and cannot be sold. If flagged internally, this is still very much a societal issue that needs to be discussed on a case by case basis by internal teams to determine if we need to disallow such products from being sold," he added.

Qoo10 said it relied heavily on and gave priority to customers' feedback to highlight products on its site that they were unhappy or uncomfortable with.

"When this happens, we have less hesitation to take down products in question, at least until we have a clearer picture of the conversations and controversies surrounding it," said the spokesman.

Related Stories
Xiaxue gets threats and verbal abuse after posting video of her Rosmah Halloween look
Why so disrespectful? Girl wears SAF uniform as costume for Halloween party
Are realistic toy guns allowed in public? Stomper spots this Halloween costume at The Verge
More About:
Halloween
inappropriate
online shopping
costumes