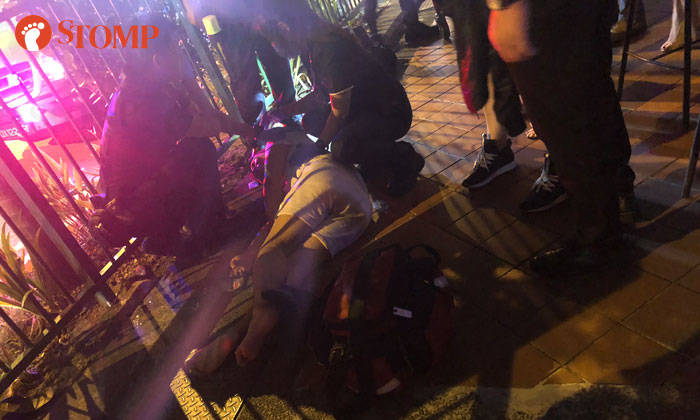 In an outbreak of violence, a group viciously attacked three men at Tanjong Pagar last year.

One of the victims was so badly beaten, his left eyeball now needs to be propped up by a metal plate in his cheek.

The video of the seven men pummelling two of the victims was so shocking, the judge postponed sentencing one of them last week, citing the need to process what he had seen.

Yesterday, that man, Mohammad Hasli Abdul Hamed, 36, a bouncer and senior member of a secret society, was jailed for three years and 10 months and given 12 strokes of the cane.

On May 23 last year, Hasli and six friends met for drinks at Superstar KTV at 47 Duxton Road. He argued with his girlfriend outside and she left.

But during the argument, Hasli thought a man had stared at him and confronted him inside the pub next door.

The group went in and attacked the man and his friend, punching and kicking them.

They kicked one of the men even as he lay bleeding and unconscious on the floor.

When an employee tried to stop them, Hasli punched her.

A video showed the group attacking the men relentlessly, taking turns to rain blows and stomp on one man's head while attacking the other.

After several minutes, the group left, with three of them heading off to another KTV.

But about three minutes later, Hasli, who was with the remaining three, bumped into another man. He immediately attacked the man and the rest of the group joined in.

They repeatedly punched, kicked and stomped on the man's face and the rest of his body, leaving him unconscious in a pool of blood on the ground.

The 37-year-old had multiple facial fractures and was warded in the intensive care unit.

He suffers from loss of hearing in his right ear. A metal plate was inserted in his cheek, and his medical bills have totalled $80,000, with more treatment required.

Deputy Public Prosecutor Li Yi Hong told the court earlier that Hasli was the ringleader of the group that attacked innocent strangers.

His lawyer Ashwin Ganapathy yesterday told the court that Hasli was aware his actions warranted a deterrent sentence.

"(These were) acts of extremely persistent and ferocious violence," he said. "I am stunned, almost in disbelief."

He said it was disturbing Hasli's secret society ties enabled him to become a bouncer, and the authorities should look further into the links between secret societies and bouncers.

He said: "It is quite alarming. Secret societies are anathema to society and have no place in modern Singapore. They cannot be allowed to spread like a cancer."