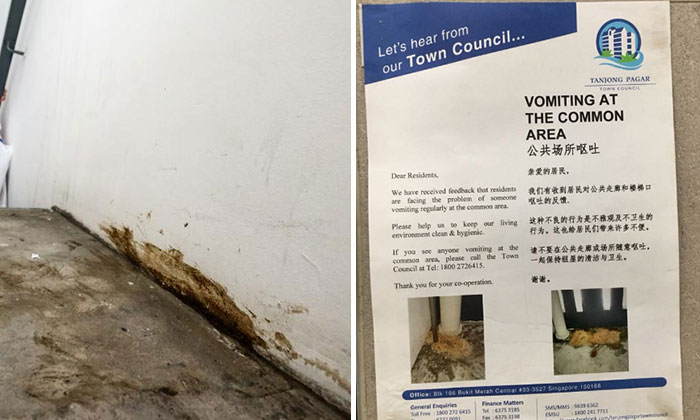 Residents of the Pinnacle@Duxton are on the lookout for a serial vomiter who has been dirtying the carpark for over two months.

Someone would vomit at the staircase of the carpark three to four days every week, and a resident even saw a pile of faeces.

A resident who asked to remain anonymous said that there are nightlight spots opposite the block, and suspected that vomits could be the handiwork of a drunk patron.

A resident who stays in Block C, Madam Xu, 78, told Lianhe Wanbao that beginning from November 2017, there would often be a pile of vomit would mysteriously appear at the staircase around dawn.

Other times, there would even be faeces.

“I go out to jog every morning, and I will go past the carpark on my way back.

“It smells horrible and it’s disgusting.”

Madam Xu said that she saw vomit at the exact same location last week as well, and suspects that the acts to be done by the same person.

Another resident, Madam Liang, 68, slammed the culprit for being inconsiderate, regardless of whether his intentions to soil the place were deliberate or not.

A cleaner at the block revealed that he had found vomit at the place on multiple mornings, and took pictures to inform the management.

In response to the inconsiderate acts, Tanjong Pagar Town Council has placed several notices up at the lift lobby of the carpark, to remind residents to keep the place clean.

The notice also encouraged residents to inform the town council immediately should they see anyone vomiting in the premises.

When reports visited the venue, they found stains on the walls left by the vomit, and there was also a strong nauseating stench.

Related Stories
Sole disgusting of girl to dry her shoes using aircon on Bus 857!
Why so inconsiderate? Receipts found strewn all over the floor at Woodlands MRT station
Someone has taken littering to new levels at Yishun Street 61
More About:
disgusting
vomit
faeces
inconsiderate