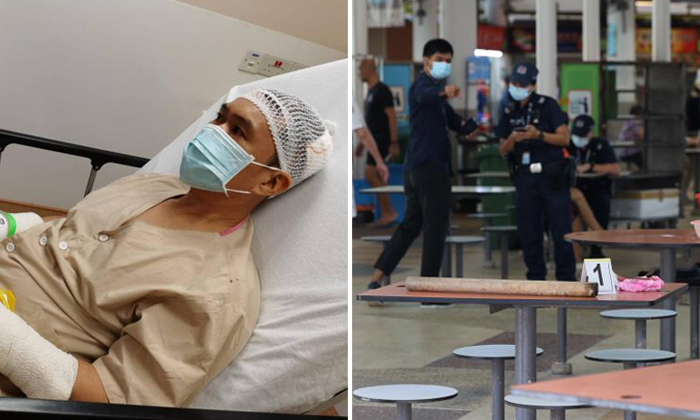 A hawker suffered a skull fracture and has a minor blood clot in his brain after being allegedly attacked by a man at Tanglin Halt Food Centre on Friday morning (April 8).

The alleged attacker is believed to be a fellow hawker at the food centre and has a longstanding dispute with the victim.

A 69-year-old man has been arrested for voluntarily causing hurt by dangerous weapon, the police said on Friday night, adding that they are investigating.

Mr Punnataro Wee, 51, was preparing vegetables outside his fish soup noodle stall at the food centre at around 7am when a man allegedly attacked him from the back with a wooden pole.

"I fell to the ground in a daze, I was in shock. When I regained my senses, I saw my girlfriend struggling with him. She was trying to prise the weapon from him," he told The Straits Times at National University Hospital (NUH), where he was warded, on Friday afternoon.

"I got up and rushed over to help her. (The attacker) fell to the floor and ran off. It was only then I felt the throbbing pain at the back of my head," he said.

He added that the alleged attacker also runs a fish soup noodle stall at the food centre.

"My shirt and pants were soaked in blood."

The police said they responded to a call for assistance at the food centre in Commonwealth Drive at around 7.10am on Friday.

The man also allegedly punched a woman and fled the scene, they said. ST understands that the woman is Mr Wee's girlfriend.

"Preliminary investigations revealed that the man is known to the victims," the police said.

Mr Wee was conscious when taken to NUH, where he was warded in the neurosurgical high dependency unit.

He suffered a fractured skull and received nine stitches on his head. His right wrist and a finger on his left hand were fractured, he said.

His girlfriend, Ms Wang Wei, 54, said that the man charged at Mr Wee with a 1m-long wooden pole that had a screw attached to it.

"It was without warning. We did not have time to react," she added in Mandarin.

"My boyfriend was bleeding profusely. It looked quite serious. I tried to grab the weapon from (the man) and he hit my head." 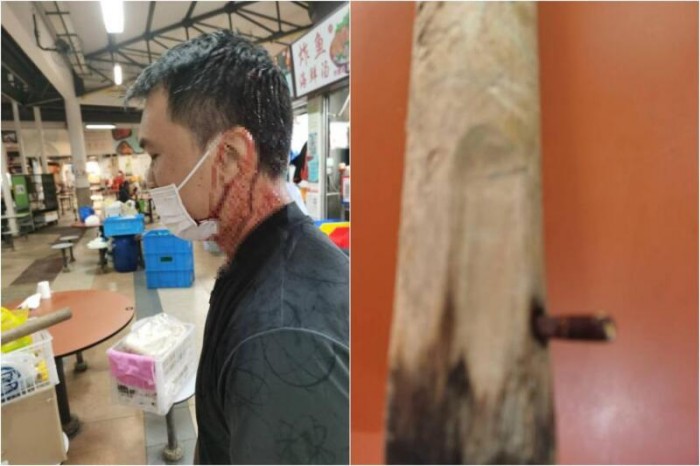 A man allegedly attacked a 51-year-old hawker at Tanglin Halt Food Centre on April 8 at around 7.10am. Photo: Wang Wei

Ms Wang said her head and left hand were swollen from the attack.

"There was so much blood. My boyfriend's mask was soaked in it. I was so frightened."

A hawker in his 50s, who runs Tong Kee Chicken Rice stall next to Mr Wee's fish soup stall, said the incident lasted about two minutes.

The hawker, who wanted to be known only as Mr Tan, said: "The man attacked when the victim wasn't looking, without a word. My wife and I were so shocked that we shouted. It happened so suddenly."

Mr Wee said that he had a long-standing dispute with the man which began in March 2020.

Mr Wee's drinks stall, which he took over from his mother in 2005, is next to the man's stall.

"We were fine all along, but one day we argued over something so minor that I don't remember what it was about. He picked up a 55cm-long soup ladle and hit my head, ears and shoulders," he alleged. "I lost a bit of hearing in my right ear." 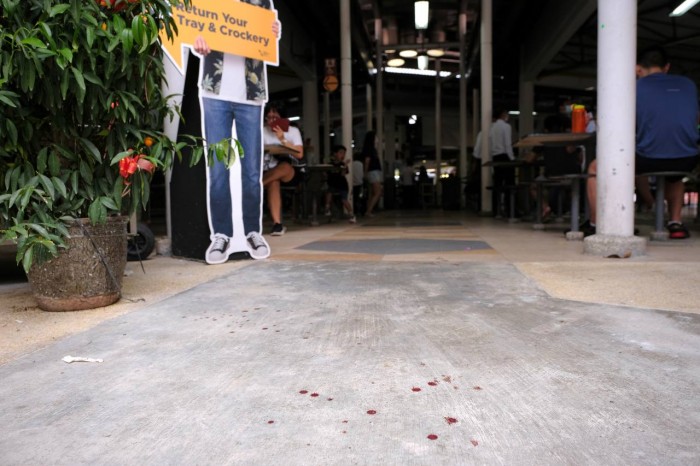 The police were called, and Mr Wee said he also made a police report in September 2020 when the man allegedly shouted vulgarities at him and his girlfriend.

He tried to get compensation for his medical bills, which totalled about $700, but dropped the case in January this year.

Mr Wee opened his fish soup noodle stall in mid-March 2020, after the incident, at another part of the food centre.

The stall was shut for about five months after Ms Wang was diagnosed with stage 3 cervical cancer last November. It reopened on Monday.

Mr Wee said: "I didn't see (the man) at all this week. I don't know why he would attack me, unprovoked, all of a sudden. If he had hit the right spot, I'd probably be dead already."

He said he has to be warded for about three days for observation due to a minor blood clot in his brain.

Said Ms Wang: "I wish something could have been done sooner to prevent today's attack. I'm traumatised and I'm worried about my boyfriend."

Those convicted of voluntarily causing hurt by dangerous weapon may be jailed for up to seven years, fined, caned or given any combination of these punishments.

Friday's incident was the latest in a string of violent attacks in public spaces involving bladed weapons such as swords, knives and razor blades.